The week before Christmas, I took myself off to Jura with the intention of walking across the island’s northern hills from Glengarrisdale  bothy to Cruib Lodge via Ben Garrisdale, Beinn Bhreac, Dubh Beinn, Rainberg Mor and Cruib. However, snowfall, biting winds and low temperatures combined with the north-west’s short mid-winter days persuaded me to stay put at Glengarrisdale instead. Here I spent my time gathering and chopping driftwood for the fire and giving the bothy a much-needed clean up. Scouring the shore for combustible flotsam at Bagh Gleann Speireig – which rather romantically translates as Bay of the Glen of the Sparrowhawk – I discovered a coconut. This exotic specimen had most likely made the long journey from the Caribbean, bobbing across the Atlantic in its buoyant husk. I cracked the husk and shell open with a rock, but rather unsurprisingly the contents were a little past their sell-by date. 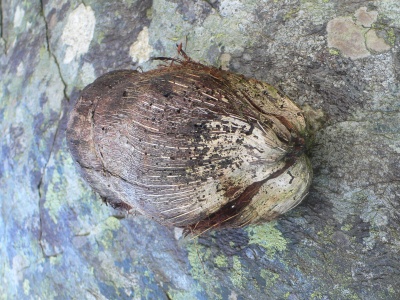 After a couple of very peaceful evenings at the bothy, sat in front of the glowing hearth reading Robin Jenkins’ A Very Scotch Affair – his coruscating take on early 1960s Glaswegian domestic strife – I set off before dawn across the frozen bog to Road End. Once on the Land Rover track I skated my way south on the icy surface through Lealt and on to the tarmacked road at Ardlussa. It being a Sunday, there was no bus service so I continued south hoping to hitch a lift sooner rather than later as it is around 23 miles from Ardlussa to Feolin Ferry – where I hoped to be by 2pm that day.

As I hurried down the road, a biting north-easterly blew in with occasional snow flurries. The road was quiet – who’d want to venture out on a Sunday in these conditions on an icy and serpentine single-track road? The man with the gritting lorry of course. Just before I reached Tarbert, Mr Gritter picked me up and took me all the way to Craighouse. It was now only eight miles to Feolin. I walked four miles in the company of Davie, a fellow erstwhile hitcher, before we were plucked from the teeth of a fresh blizzard and whisked down to Feolin by a very public-spirited chap.

We made the five minute crossing of the Sound of Islay on the Eilan Dhiura, arriving at Port Askaig. Looking back across the sound, the Paps of Jura were resplendent under their snowy mantle. I was soon picked up by friends arriving on the mainland ferry – we would be spending Christmas at Port Charlotte on the Rinns of Islay and I was already looking forward to getting in a few walks around Islay’s magnificent coastline. 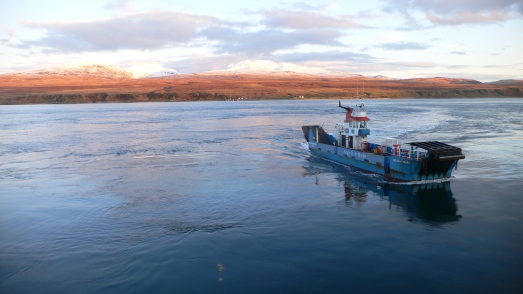 Over the following days we enjoyed fine strolls around Ardnave Point and Machir Bay in bright, but changeable conditions.  To the west,  expansive sea and skycapes were animated by the froth of thundering breakers rolling in along the Atlantic coast and sunlit flotillas of wind-driven clouds sailing east. To the north and east the horizon was framed by snow-capped hills including Ben More on Mull and the unmistakable shark-tooth summit of Ben Cruachan east of Oban. The lovely Paps are visible from all over Islay and appear to be  part of the same island until you’re looking across the narrow sound to Jura; sunlit and snow-blanketed, the quartzite domes were even more omnipresent than usual. The ground was frozen solid and the smaller lochans were glazed-over with thick sheets of ice ; some burns had even seized up in mid flow, while sand and pebbles along the shore were fused by the frost. Bare, frost-dusted trees looked sugar-coated in the low winter sunlight while cold winds and flurries of snow and sleet completed the wintry feel of the island.

On Christmas Eve, myself and Fiona borrowed Bess the dog from our friends and set out to walk around Islay’s north-eastern tip. Leaving the car on the road above the Bunnahabhain Distillery on the Sound of Islay, we set off towards Rhuvaal lighthouse following the ATV tracks that wend their way through the boggy terrain above the shore.  Happily, the boggy ground was mostly frozen solid and the risk of slipping on the ice was vastly preferable to boots full of peaty bog-water. Bess had several exciting opportunities to chase small herds of red deer that seemed to take flight more out of a sense of obligation than genuine fear of a small black dog with an essentially affable nature.  In less than two hours we arrived at Rhuvaal – surely one of the most magnificently situated lighthouses in the British Isles. The tall, slender white 36-metre high beacon stands sentinel-like overlooking the Firth of Lorn and the Sound of Islay. On a clear day there are magnificent views of Jura, Mull,  Colonsay, Scarba and the Garvellachs to be enjoyed.

Standing at nearly 36 metres (120 feet), so as to cast its beam as far west as the Neva Rocks, the lighthouse was built between 1857 and 1859 to the design of David and Thomas Stevenson for the Northern Lighthouse Board. The ‘lighthouse Stevensons’ were a Scottish engineering dynasty headed by Robert Stevenson, grandfather of the novelist and poet Robert Louis Stevenson. Of his family’s engineering feats, he wrote:

Whenever I smell salt water, I know I am not far from one of the works of my ancestors. The Bell Rock stands monument for my grandfather; the Skerry Vhor for my uncle Alan; and when the lights come out at sundown along the shores of Scotland, I am proud to think they burn more brightly for the genius of my father.

Three generations of Stevensons built lighthouses, initially around Scotland’s coast and then, as their reputation spread, they were engaged on projects as far afield as Japan and the Straits of Malacca.

Continuing around the coast from Rhuvaal, we soon found ourselves looking down on the huge sandy beach at Bàgh an Dà Dhoruis. We descended to the shore to find much of the sandy shore encased in a thin carapace of ice; large quantities of tentacle-like kelp fronds lay washed up in tide line piles.  The coastline was now dramatically different than the Sound of Islay and much like the castellated and crenallated west coast of Jura, with vast raised beaches, huge caves, rock arches, rock stacks and waterfalls – geological phenomena resulting from the process of glacio-isostatic uplift that began after the retreat of the ice cap at the end of the last glacial period some 17,000 years ago. Dozens of huge basalt dikes emerge from the country rock along this stretch of coast forming impressively-proportioned natural groynes. They were formed during a period of intense volcanic activity in the Lower Tertiary period, some 56 million years ago, when upwelling magma filled cracks in the Earth’s crust radiating out from centres of eruption on Arran and Mull.

We spent the next couple of hours forging a route through this remarkable landscape, enjoying our great good fortune at having such a bright, crisp and beautiful mid-winter’s day for our walk. Bess also enjoyed the opportunity to chase some wild goats, before running away once she’d actually caught up with them, and to our astonishment she also found a wild cat to chase. Feral cats are found in some areas on Islay, especially around rabbit warrens, though these are not the distinct species of Scottish wild cat – felis sylvestris grampia.

As the sun started its arc of descent to the west, we cut inland from the coast heading across country to reach the Sound of Islay again just north of Bunnahabhain. As we made our way through the hilly and boggy terrain we encountered sizeable herds of red deer, though Bess was not so interested as she was obviously tiring. Still, she had enough energy to follow me up the snow-blanketed flank of Sgarbh Breac although Fiona elected to continue along the ATV track back to the Sound of Islay. From the top we had magnificent views back across Islay and over the sound to Jura in the late afternoon light. Below us to the south we could see the tiny figure of Fiona highlighted against the snow as she made her way towards the sound and Bunnahabhain.  We were soon tumbling pell-mell down the snowy mountainside in hot pursuit.