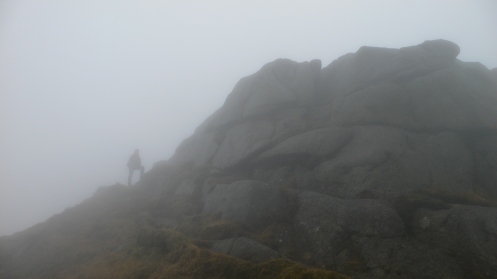 Sunday morning, jumped into the Ka and 45 minutes later we were at Ardrossan. Soon after, we were boarding the Caledonian MacBrayne ferry, Caledonian Isles, which would take us to Brodick on the Island of Arran. Door to door from Glasgow to Brodick is only two hours, so now that the days are getting longer there’s plenty of time for a daytrip to ‘Scotland in Miniature’, as the island is sometimes known. And, indeed, Arran covers most bases required for this title, with the exception of post-industrial landscapes, Old Firm fixtures and the Wee Free church.

The plan was to climb the famous Goatfell (874m) and descend by the north-west ridge to the saddle between Glen Rosa and Glen Sannox, and thence to return to Brodick by way of Glen Rosa. This was the second morning crossing we’d made on a Calmac ferry that week and, therefore, the second Calmac Full Scottish Breakfast opportunity of the week. I couldn’t quite face it, but Fiona was hugely excited when she returned from the cafeteria with her plateful of assorted fried pork products.

Once Fiona had scoffed her breakfast, we went up on deck to take the bracing air as the ferry completed its 55 minute crossing of the Firth of Clyde. Arran remained invisible, utterly shrouded by low, damp cloud. Only when we were almost upon the pier at Brodick did we catch a glimpse of the island, but the existence of the mighty Goatfell remained a matter of hearsay and conjecture.

Off the ferry, we boarded the 324 bus and whizzed the two and a half miles along the coast road to Brodick Castle. A well-maintained, signposted track leads up through the castle grounds and on to the hill. The path is extremely easy to follow all the way to the top, which is just as well as it was a real pea-souper and we’d suffered something of a meltdown of our navigational tools. I’d managed to leave my altimeter at Ruantallain bothy on Jura the previous Sunday and on checking my compass, I discovered the needle had come adrift.

We thought the climb would be a doddle; 874 metres is no mean height for a Scottish mountain, but the gradients are fairly steady. However, conditions were very still at this juncture and we both began to work up quite a sweat, peeling off layers as we forged higher. Soon enough, we arrived at the summit trig point and found a seagull waiting for us in the murk. It was immediately obvious that this feathered critter was an old hand at working the tourist trade. Once we’d taken a perch to have some coffee, he came and staked us out at a respectful distance, seemingly confident that in the fullness of time he would receive his reward. Which he did. I only hope that the Lindt 75% dark chilli chocolate we gave him didn’t interact too adversely with his digestive tract. 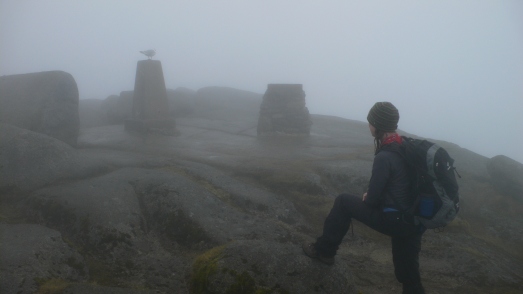 As we prepared to continue on our way, a couple of figures emerged from the soupy cloud cover: two young women who had attempted to find their way down to the Stacach ridge, but had given up and were going to retreat down the main drag to Brodick Castle. They loaned me their compass so I could take a bearing, and off we went. The route down to the ridge wasn’t all that obvious in the conditions as there are large boulders to cross. We found the path that traverses the ridge and made our way north towards the summit of North Goatfell (818m). The pinnacled ridge was very impressive with jutting fingers of rock pointing forebodingly through the murk above us. The path was pretty good, but we were conscious that we didn’t want to miss the fork below the summit of North Goatfell that would take us north-west down the ridge to the saddle above the head of Glen Rosa. The other fork bends east of north towards the summit of  Mullach Buidhe (819m), Goatfell’s other top.

It should all have been quite straightforward, but without my compass and altimeter I felt a bit wary given the lack of visibility. Several other paths – and eroded gullys that looked like paths – intersected the ridge at points, so we really had to keep our eyes on the ball. We had walked maybe 50 metres along the Mullach Buidhe path before I realised our error – so we backtracked and found our path up and over North Goatfell. Surely we were on the path down to the saddle now? I felt pretty confident, but up here in the murk on an exposed ridge with the wind beginning to pick up a little and a band of rain coming in, those niggling uncertainties were still there.

I’ve lost my way any number of times in the past, usually because I couldn’t be arsed to check the map. ‘That looks like it’, I’d think and off I’d go. Most recently, I led myself and Fiona in a 45 minute circle around a forestry plantation beneath Cairnsmore of Carsphairn because, initially at least, it looked like the right way. Happily my compass was still working at the point. Some years ago, however, I led Steve, Andy, Dan Des and Chris radically off-course in Slovenia’s Julian Alps. We had laminated sections of our route map, which didn’t show the wider area and we were following a way-marked path for Razor. The route was marked as number ‘1’ on the map and painted waymarks indicated route ‘1’ on rocks and so forth. We had arrived a path junction and there was some uncertainty. Dan took a compass bearing, which indicated our route was in one direction, but I noticed a number ‘1’ waymarker going a different way. ‘No,no, no’, I insisted, ‘this must be right’ and off we all tramped in completely the wrong direction. It turns out there were two number ‘1’ paths for Razor and if we’d checked the area map, it might have occurred to us. Doh!

It was a great walk anyway and as it turned out it was quite lucky we ended up on our alternative route as Chris became ill and the next day he had to be taken down to civilisation at Tolmin, which was much nearer as a result of my cock-up. Obviously I can’t claim any credit for that. Ho-hum.

Anyway, back up on the ridge, myself and Fiona descended and descended and it really did seem to be taking an age. The uncertainties gathered force. However, it was a well trodden path and the worst it could do would be to lead us off the hill at a less convenient point. Pride was at stake also: could I make up for the Great Julian Alps Debacle? Yes! Indeed, it seemed I could, as a gust lifted the ragged tails of cloud cover over the saddle and Cir Mhor (798m) was momentarily visible on its far side.

Checking the time, it seemed we were in with a decent chance of catching the 4.40 ferry back to Ardrossan, so we headed down Glen Rosa with a purposeful stride. It’s a long old glen and our margin had somewhat decreased by the time we hit the tarmac at its mouth. Surely the bus would pass on its way back into Brodick to meet the ferry? Yes! Two of them in fact and we missed them both by yards as they sailed by the junction ahead of us. Boo. We strode on, but Fiona was tiring and we were no longer confident we’d make it. We had ten or so minutes to cover the last mile. There was the ferry – people visible climbing the gangway. We were a few hundred yards away and the ferry had yet to depart. We broke into a run and just managed to get there as the gangway was about to be closed. Triumph! Two and a half hours at Brodick ferry terminal averted.

Anyway, I’m off down the outdoor shop to get me a new compass!