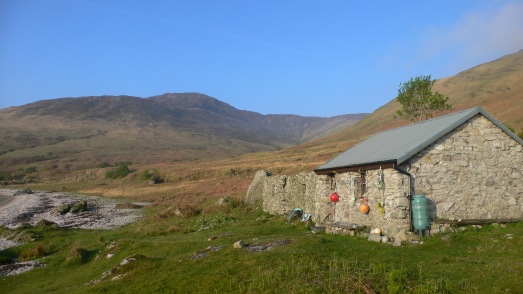 After my big walk across the hills of northern Jura the previous day, I woke early on Friday and set off from Cruib Lodge to intercept the Jura Bus at the head of Loch Tarbert. My legs were a bit heavy, but the going was good and I emerged on to the A846 – the Long Road – with time to spare. This was opportune as I had time to talk to Len Jones, who was sitting in his car surveying the landscape through his binoculars. Seeing me emerge from the boggy hinterland, Len leapt out of his car and greeted me warmly as an obvious fellow fruitcake. Len had just spent the week on the west coast of northern Jura, that wild and fabulous region that seems to take a hold of many of us who’ve ventured there.

This is certainly the case with Len who first came to Jura some 30 years ago and has been back every year since. Len is from near Aberconwy in north Wales and his earliest trips to Jura were as a leader with two school groups: Ysgol Aberconwy and Ysgol y-Bont – the latter being a special needs school. Captivated by the island, Len returned frequently and with two friends – Pete Collins and Dave Garvie – he helped to renovate the old croft, which is now Glengarrisdale bothy. Subsequently, Len was a marshall for some years on the Isle of Jura Fell Race; now he returns every year just for the love of the solitude and wilderness. The Jura Bus rolled up and I jumped onboard to head south to Craighouse with Konrad and his cargo of small people destined for the Small Isles Primary School.

Later on that hot and sunny afternoon, I took the Eilean Dhiura ferry across the Sound of Islay where I met Fiona off the CalMac ferry from Kennacraig. Shouldering our packs, we lurched off up the road out of Port Askaig before picking up the path that leads through the woodlands and past the fishing lochs of the Dunlossit Estate. After an hour, we emerged on the road to Lossit Farm from where we followed the farm track down to the shore on the Sound of Islay. It’s an hour or so’s walk south along the sound to the wonderfully situated An Cladach bothy and on a clear day the views along the sound and over to the south of Jura are sublime.

I was sure that the tiny one-room bothy would be occupied at this time of year, but we had a tent with us just in case. We arrive to find the bothy empty – except for a number of small furry inhabitants who’d been enjoying the food left on the bothy’s ‘kitchen’ work surfaces. As well as chewed up wrappers, the surfaces were covered in mouse pee and poo. Leaving food behind in a bothy is a bit of a negligent thing to do, but we thought perhaps the last visitors just forgot. However, a little later we discovered some broken bottles on the beach, which really pissed us off. As well as being outrageously disrespectful to this environment and all those who use and maintain An Cladach, smashing bottles on the rocks is a really stupid and dangerous thing to do. We could easily have lacerated our feet when going for a swim, or an otter or dog could have got hurt. Fortunately, this kind of thing is entirely unusual – I hope it stays that way.

Once we’d sorted the place out and vented a bit of spleen, we relaxed into our beautiful environment and got on with enjoying our evening.

The bothy sits just above the shore at Rubh’ a’ Chladaich, which roughly translates from the Scottish Gaelic as the point of the stony beach. I think. Happy to be corrected. In fact, I’ve just discovered that despite having visited this spot a number of times  over recent years,  I’ve misspelled An Cladach as ‘An Claddach’ throughout the Jura, Islay, Colonsay guidebook. Oh, the shame. Roll on the second edition.

Anyway, as I was saying, the bothy sits above the shore and has fine views along the sound. The bench outside the bothy is a great spot for watching the wildlife come and go – you’re almost guaranteed to see otters hunting if you’re here for a while.

Early next morning, the interior of the bothy was flooded with golden sunlight, which propelled me out of my sleeping bag to fire up the Trangia for tea. Much tea was drunk and bacon sarnies were scoffed outside on the bothy bench before we embarked on our day’s walk (click on the map to see the route). 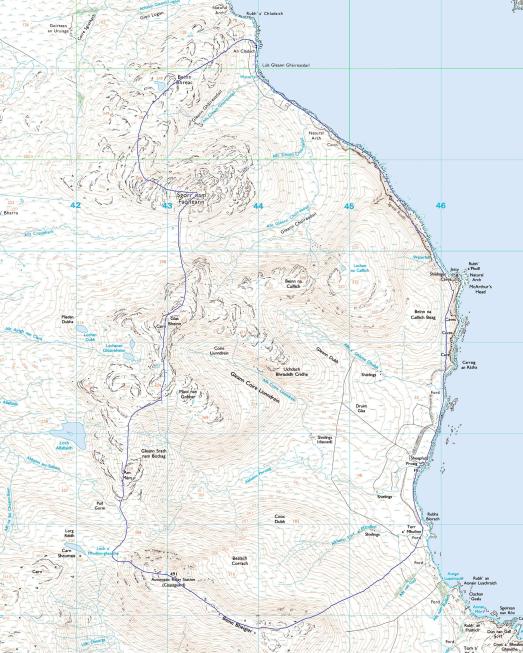 We set off from An Cladach (just the one ‘d’) and made our way up the flank of Beinn Bhreac, making for the ridge at the earliest opportunity. With spring coming late, the bracken was still very low, which is a huge advantage when walking in this area. Once on the rocky spine of the ridge, the going underfoot is easier. We continued to climb south-west up the ridge for the best part of two kilometres, following it’s curve to the east on to the ridge of Sgorr nam Faoileann, reaching the summit after a further half-kilometre. Although Sgorr nam Faoileann (429 metres) is of relatively modest height, there are fine views from here in good weather. The length of the Sound of Islay and the curve of Jura’s south-western coastline are visible to the north-east. To the north, Rhuvaal lighthouse marks Islay’s north-eastern extremity, with Colonsay visible beyond. 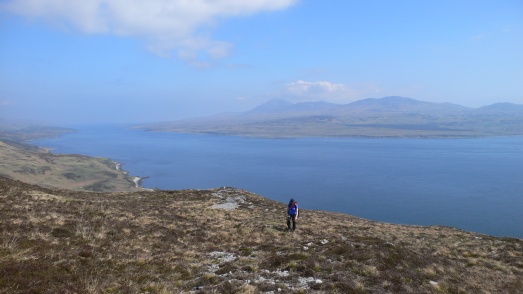 The morning was already hot and on the way up the hill I was feeling distinctly ropey. I suspect I was probably dehydrated from lots of walking and far too little water the previous day. By the time we got to the summit of Sgorr nam Faoileann I wondered if I might have to call the walk off and head back to the bothy. We took a break and after drinking a deep draught of water, I started feeling a bit better.

Just over a kilometre south of the summit of Sgorr nam Faoileann as the crow flies is Glas Bheinn. We descended the southern flank of Sgorr nam Faoileann, picking a route through the patches of scree and heather and making for the dry-stone wall at the eastern side of the saddle between the hills. The climb up the the rocky north-eastern slope of the mountain was made easier by the encroaching cloud cover and gathering breeze. 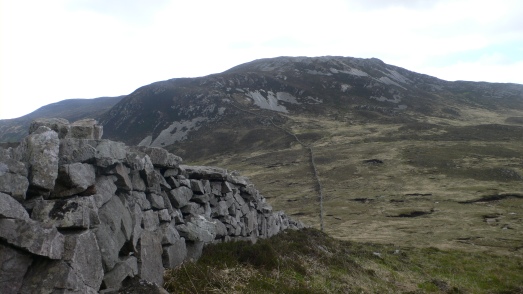 From the summit (472m) of Glas Bheinn there are views down to the bay at Proaig on the west coast and over to the humpbacked ridge of Beinn Bheigier lying three kilometres to the south. Something about the relative scale of the long ridge of Beinn Bheigier makes the mountain look as if it’s dauntingly distant from Glas Bheinn, but I remembered I’d had the same impression the last time I walked the route. Sure enough, the walk down along the ridge to the saddle beneath the northern flank of the Beinn seemed to pass fairly quickly.

We climbed up to the col on the north-west flank of the mountain and from there we launched ourselves up the heather-cloaked and scree-clad hillside towards the summit. 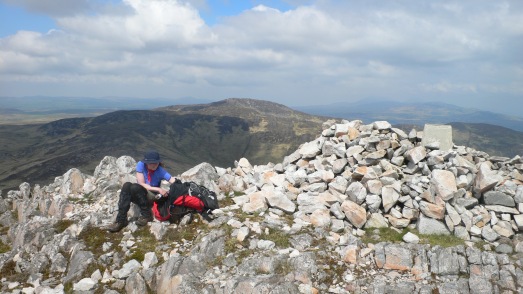 Arriving at the summit cairn (491m), we stopped for a quick rest and our sandwiches, before we set off south-east along the kilometre-and-a-half-long ridge with fantastic views in every direction. 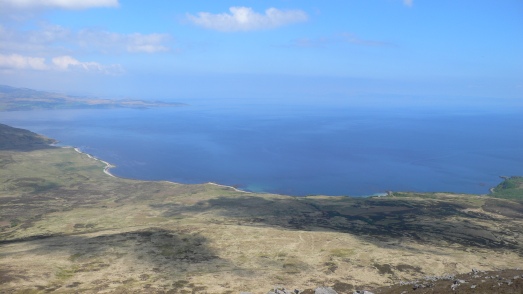 Where the ridge begins to descend, we dropped to the north-east off the hillside, making a bee-line for the point where Rubha Biorach protrudes gently into Proaig Bay. I remembered that the last time I’d walked this route coming off the hill had been a real pain – stumbling through bracken, ankle-turning heather and boggy ground, but I couldn’t really see an alternative. However, this time the ground seemed so springy it was almost as if we were bouncing down the hillside. In no time we had picked up the track running above the shore and dropped down in to Proaig Bay.

Crossing the Abhainn Proaig, we arrived at the old croft and sheepfold where stands the Proaig bothy. The bothy was re-roofed a few years ago but cracks in the walls have led to birds nesting inside the building, making Proaig an inferior alternative shelter to An Cladach, which is some six kilometres further north-west around the coast.

A glance in the visitors book revealed that the previous day a chap by the name of A. Dempster had passed through, researching a guide to Scotland’s best coastal walks to be published in spring 2011. I look forward to his opinions on this matter! 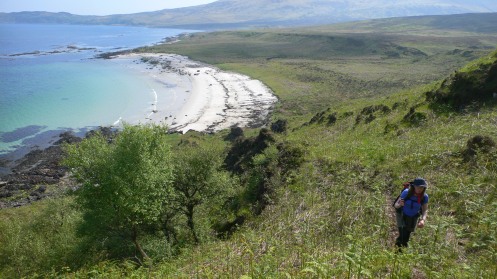 Continuing north along the shore from Proaig for a kilometre brought us to the foot of Beinn na Caillich Beag (small hill of the old woman) on the far side of a lovely white sand beach. There is a vague path climbing north, which initially follows an exposed rock ‘staircase’. The ‘path’ climbs to around a 100m and we continued north for several hundred metres above McArthur’s Head lighthouse, which, in common with Rhuvaal lighthouse (1859), was built by David and Thomas Stevenson in 1861. We dropped down a broad gully to the north-west of McArthur’s Head and soon arrived back on the Sound of Islay. From here it was a further three kilometres back to An Cladach along the coast. We dawdled along, quite knackered by now, gathering driftwood for a fire back at the bothy.

Once ‘home’, I cooked up a storm on the Trangia – Venison steaks, rice with dried mushrooms and tomatoes and Provencal veg. Pity we didn’t have a bottle of Chateaupoop du Naff to wash it down with, but after such a great walk on such a glorious day sitting in front of a crackling fire at the world’s best bothy – I can’t say I was really wanting for anything. 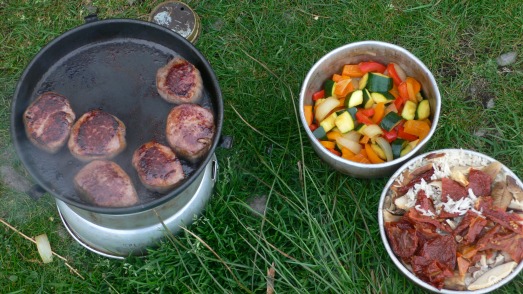 By the way, if you want to read a far better account of a very similar walk then visit James Boulter’s excellent site!

If you happen to read this Mr Armin Grewe, please go easy on my guidebook if you do review it – even though there’s no excuse for me awarding An Cladach an unnecessary extra ‘d’.