Sorry about the irritating heading. I suppose it should read: Mountain-biking on the South Downs, which incidentally is the title of my forthcoming guidebook for Cicerone Press. Well, I say forthcoming when we’re actually looking at next May-ish. Anyway, the term ‘jungle-biking’ was coined by the lovely Andy Rayment – he of the Brighton-based bike shop dynasty. I like the irreverence of the term and the fact that it’s as accurate a description of what you’re actually getting up to on the Downs with a bicycle as ‘mountain-biking’. Especially when you’re steaming around the environs of Arundel – as I was today. The Sooth Doons thing is a side-effect of my having lived in Scotland these past four years. Comedy Scot’s accents have been a great way of depleting my already tiny reserves of Scottish friends, but I just can’t seem to stop it…

Any road, I’ve been down among the Downs in very sunny Sussex for the past couple of months, ostensibly researching routes for the guide, and I’ve had a fantastic time revisiting many favourite Downland coombes and  ridges and discovering a few new routes in the process. The late onset of summer and the glorious weather have dovetailed perfectly with my research trip and I can hardly get over how wonderfully beautiful these understated, green rolling hills are. Living in Glasgow, we’re in striking distance of some truly grand landscapes, which I thoroughly appreciate , but there is something special about the green hills of my former home. Oh, and the jungle-biking is absolutely fantastic in these parts. There are literally thousands of kilometres of bridleways and byways available for mountain-bikers to take advantage of – making for a seemingly inexhaustible range of possible routes. 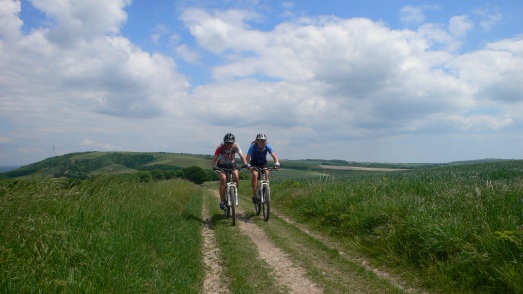 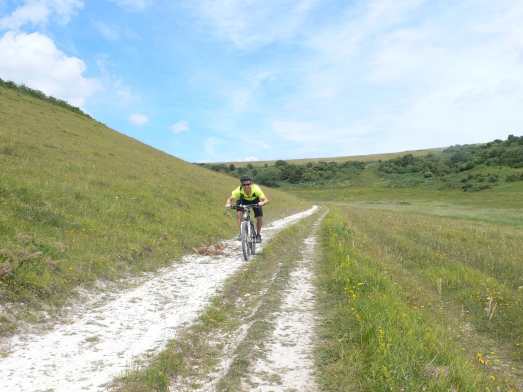 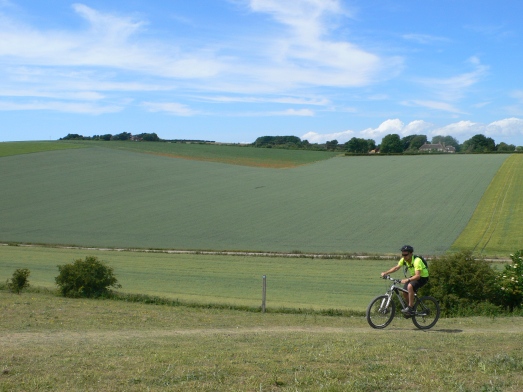 Many of the above pictures feature my old mate, Andy Dodd (as well as his fiancee, Jen) who has been accompanying me on a few of the ‘research’ rides. We’ve been riding together on the Downs for a good few years and it’s been great to have his enthusiasm and never-say-die attitude onboard.

I first started mountain-biking when I was about twenty, nearly a quarter-century ago (eek!), my first MTB was a Muddy Fox Courier and on that rather untrustworthy steed I really got to know the eastern Downs like the back of my hand. It was the start of a life-long love both for jungle-biking and the flint-studded chalk bridleways and ‘whale-backed, bow-headed’ Downs. Many years later, I’m riding my slightly battered six year-old Stumpjumper (just fitted with disco brakes!) and my love of the Downs is just as strong as it ever was.

If you chance on this post and you happen to have some good images of mountain-biking on the South Downs that you might like to see published in a guide by the UK’s leading outdoor pursuits guidebook publisher, then let me know here at writesofway. Can’t pay you for them, but any images used will be credited and you can enjoy seeing them in print!