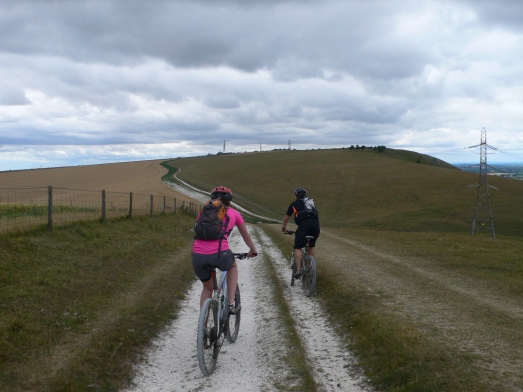 Today, as a great lowering grey blanket of cloud sat above the Downs, I set off with Andy and Jen to cycle The Great Chalk Rollercoaster – a very uppy-and-downy section of the South Downs Way above Brighton. We’ve had nothing but blue skies down here in the sunny south these past couple of months, so it was a novel experience to head out with even the smallest hint of rain in the offing. Just in case the cloud descended catastrophically low, Jen was sporting a strawberry Opal Fruit pink cycling top, which would be visible from a very great distance in the densest pea-souper. 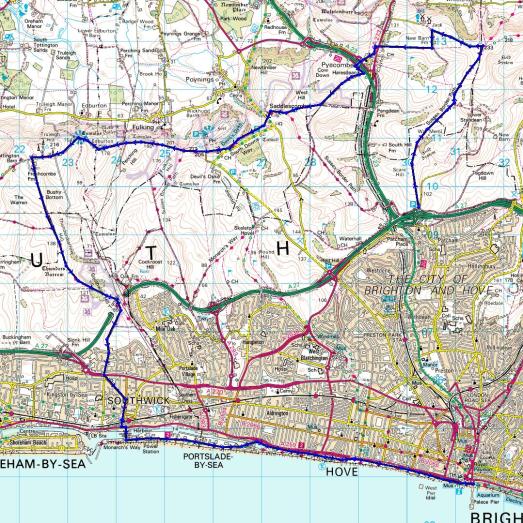 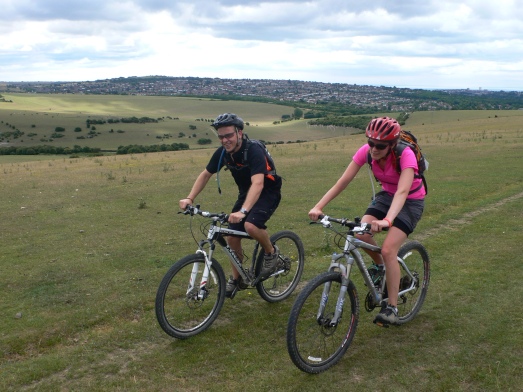 Leaving the thrum of traffic on the A27 bypass behind us, we began the long slog up the grassy incline to the South Downs Way, the great bank of cloud looming ahead of us. On the way up, the bridleway took us past the Chattri – a war memorial marking the site where the remains of Hindu and Sikh Indian soldiers who had died of their wounds during the Great War, were cremated on a pyre.

The Chattri war memorial, perched on its beautiful Downland vantage point, commemorates Hindu and Sikh Indian soldiers who died in hospital in Brighton after evacuation from the Western Front during the Great War. Fifty-three soldiers were cremated at the site according to funereal custom. The Chattri, which means umbrella in Hindi, Punjabi and Urdu, was designed by E.C.Henriques from Mumbai. The dome and its eight pillars are built from white Sicilian marble. Three large granite slabs lie over the site of the funeral pyres. The design symbolises the protection offered to the memory of the dead.

Continuing on our way we pedalled through some arable fields and received a free dose of insecticide from a large motorised agricultural appliance.  Safe in the knowledge that we were now unlikely to be struck down with black fly or ergot or whatever, we pedalled on up to the ridge where we joined the South Downs Way and the start of the rollercoaster.

No sooner had we arrived at the top of the ridge than we were off downhill again, weaving our way around a number of dog walkers and keeping an eye on the weather we seemed to be heading towards.

Cleaving to the South Downs Way, we turned sharply away from Jack and Jill windmills and were soon enjoying a rapid descent past Pyecombe Golf Club. Crossing the A273, passing through Pyecombe and on over the A23 road bridge, we were soon on the bridleway again, climbing past Haresdean Farm. It’s quite a pull up the chalk track to the top of West Hill, but Andy and Jen seemed to be enjoying themselves.

At the top, we met a pleasant Scottish lad from Troon, who had relocated to Petersfield – some way further west along the Downs. He was carrying camping kit in panniers and was taking several days to cycle the whole South Downs Way from east to west. This, he said, was his third time. On the steep uphill sections he admitted, there was nothing to be done but get off and walk, laden down as he was. We all rolled down the steep grassy slope on the western flank of West Hill and continued on through Saddlescombe. 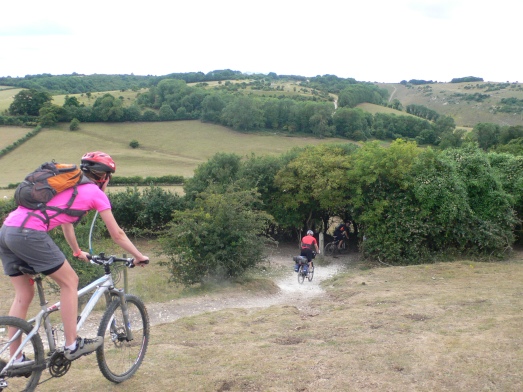 Crossing the minor road, we began our third big climb of the day – up to Devil’s Dyke. This climb is very steep in its lower reaches, but thankfully it eases off after a bit. There’s some grand scenery around these parts and you really have to appreciate it even if you’re experiencing a bit of pain at the time.

Soon, we were up on Devil’s Dyke and continuing ever westwards to where  The Great Chalk Rollercoaster becomes rather thrilling with a rapid succession of ups and downs. From Devil’s Dyke, Truleigh Hill looks very close and very straightforward to get to, but tucked away from view the serpentine, chalky South Downs Way winds its way down and up Fulking Hill, Perching Hill and Edburton Hill before climbing Truleigh Hill itself. It’s a lot of fun, but it can hurt a bit when you’ve already got a few hills in your legs.

Arriving intact on Truleigh Hill, we stopped for a snack and admired the view out over the Channel beyond Shoreham-by-Sea. The dark clouds looked ever more threatening and something that looked rather like a whirlwind seemed to be hovering over the sea. They’re not unknown in this area and if it had come our way it could have added a whole new meaning to going out for a spin on the bike (I know my jokes are really, really lame – it’s the lovely Fiona you should feel sorry for).

Refuelled, we cut through Freshcombe and Summerdeane Farm and thundered down the bridleway to join the Monarch’s Way and cross the superbly-named Thunderbarrow Hill. We continued down over Southwick Hill, eventually emerging into the hinterland of Shoreham after avery long descent indeed. On through Shoreham, under the railway bridge and we were on the A259 and following National Cycle Route 2, through Shoreham Harbour and onwards to the holidaying crowds on Brighton seafront. Home and dry, despite all the glowering clouds.