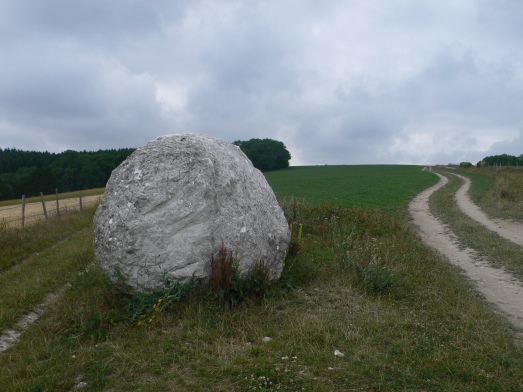 I was out jungle-biking again today. A very fine route too, starting and finishing in Chichester and taking in a big loop on the Downs to the north of the miniature city, which only really qualifies as such on account of its cathederal. It was a great ride, but I won’t bore you with the details. It was a very interesting ride as well, not least because my return route passed by Goodwood Race Course and it happened to be a racing day. The place was teeming with folk out for a day at the races and this made for a fascinating spectacle in itself, never mind the gee-gees. Coach loads of people getting stuck into booze-oriented lunches by the side of the road, squads of wide boys in even wider suits and teetering teams of tangerine-tanned totty in challenging frocks. As I wafted through the midst of the race day hordes, sweat-drenched and mud-spattered on my jungle bike, I was attracting some curious looks. I should have taken some pictures, but there were lots of police officers around and taking photos in a suspicious manner is an arrestable offence these days.

I digress. Other culturally and sociologically interesting phenomena  I encountered on my ride today included a sighting of another free-range Andy Goldsworthy environmental artwork. That is, a large chalk ball as pictured above and here again below:

If it looks like a large ball of chalk, that is because etc……

Andy Goldsworthy says this about his
work –
“Chalk is a huge mass of material in the
Downs and yet is largely hidden. Where
it does make an appearance…it looks
strange and unreal, as if it didn’t belong.
A place is so different at night – it is
like being somewhere else. If chalk
represents another side and way of
looking at the land, so does the night.
Perception, feeling and senses are
changed by darkness. A whole different
range of emotions is released at night
We have a fear of the dark – it is
unnerving. At first I felt strange being
out and alone in the dark in a wood or
on a mountain but now feel a sense of
protection under its cover. I want to
understand, explore and use the different
responses and emotions provoked by
night.
In some ways because it is less easy
to see, other senses become more acute.
By day we are spectators but at night
the division between place and ourselves
becomes obscure. Form becomes less
defined – the experience is more
introspective.”

Apparently there are a number of these chalk balls dotted around the western Downs. I’ll look forward to bagging a few more over the coming weeks. I’m an admirer of Mr Goldsworthy’s work, particularly the way he takes natural materials from their context and makes them into something striking or beautiful with the minimum of fuss. Writesof way recently encountered Mr Goldsworthy’s Striding Arches on a walk in Dumfrieshire.

Sandwiched between the stimulating yet somewhat divergent cultural experiences of Goldsworthy and Goodwood was something of a different order entirely. Out jungle-biking on the Downs you encounter other mountain-bikers of various shapes and sizes, the seriously fit and the less so, those on very expensive full-suspension machines and others riding very basic models. Until today, however, I’d never encountered anyone on an all-terrain unicycle. 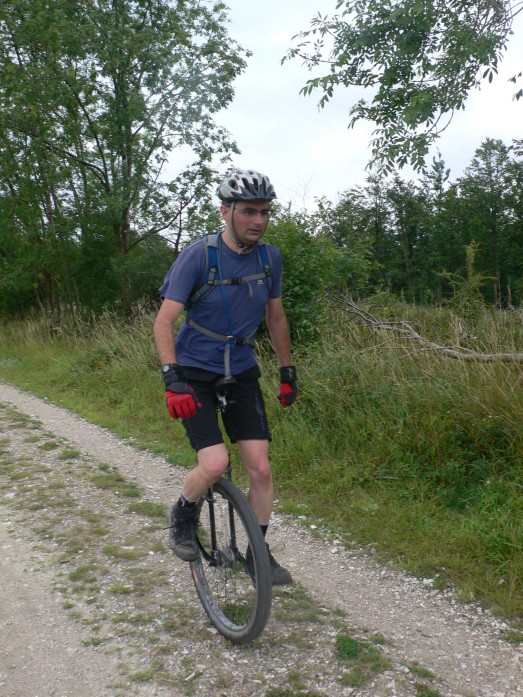 Our hero is a very nice chap; he was happy to have his photo taken and otherwise behaved for all the world as if unicycling along the South Downs Way was a perfectly workaday pastime. Given that I met him coming the other way shortly after I’d reached the top of a very big climb, I should have followed him to see how he would negotiate such a precipitous descent. I think you need fitting with an airbag if you’re going jungle-biking on one of those things.

I’m back to the environs of Chichester for another ride tomorrow and I’m already excited about what encounters I might have. Which reminds me, a couple of weeks ago myself and Andy were cycling past Chanctonbury Ring and ran into the Naked Rambler. You’ll be glad to hear that it never even occurred to me to take a picture.