The six wheels in question belong two-apiece to myself and my friends Andy and Jen who accompanied me last week on an (off) road test of a few routes to be featured in the forthcoming Cicerone guide Mountain-biking on the South Downs (due for publication next spring).

The previous weekend, myself and Andy had undertaken a huge ride out of Winchester, eastwards to Butser Hill and back again. It was an absolute monster, with some tough ascents and cracking downhills – the only downside was being caught in an absolutely torrential downpour five miles out of Winchester on the way back. It was a real comedy monsoon – like someone was aiming a hosepipe at you. All the gore-tex in the world wouldn’t have kept us dry, hence the long train journey back to Brighton was slightly challenging. Here’s Andy, pre-monsoon, descending from Butser Hill along Lime Kiln Lane:

Happily, our three-day camping and cycling excursion – based at Houghton Farm campsite near Amberley – was monsoon free. Here’s Jen, smiling through the pain on the tough chalk-track climb west out of the Arun Valley along the South Downs Way: 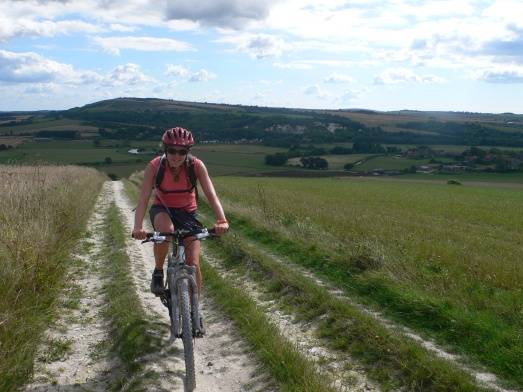 The biggest and best ride of the three days was a minor epic taking in Bignor Hill, Barlavington Hanger, Graffham Down, East Dean, Upwaltham, Stane Street Roman road and Houghton Forest. This is a great route (featured in the aforementioned guidebook) with some really tough climbs, excellent long, fast descents and great scenery. Much of the ride is through woodland including ‘hangers’ along the steep northern escarpment of the Downs. Remarkably, we saw just a few walkers and one other mountain-biker all day. Far more numerous were the extremely shy roe deer, small herds of which we startled up – unfortunately they weren’t hanging around to get their pictures taken.

Instead, here’s Andy and Jen approaching Barlavington Hanger, which has one really mean, steep and rutted climb: 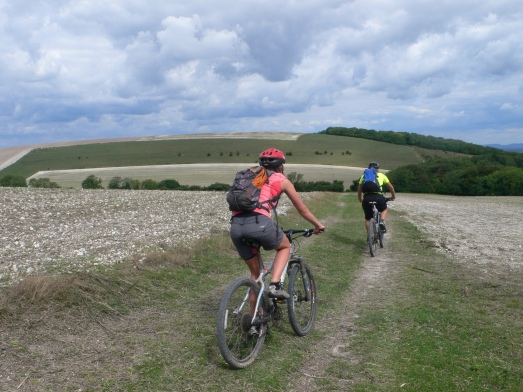 On the subject of climbs, here’s Jen tackling a very steep grassy hillside out of the picturesque hamlet of Upwaltham: 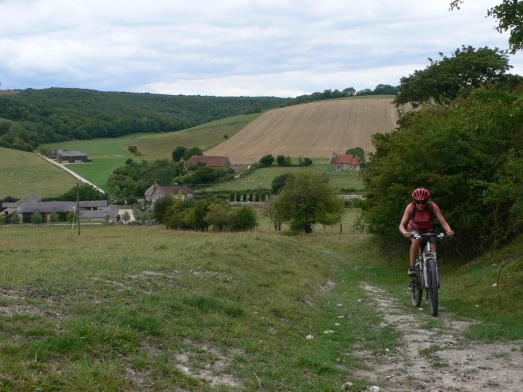 It’s hard to capture the gradient in a photograph, but believe me this one would be enough of a challenge on foot.

On our final morning, we had a burn around the Downs east of Amberley, also taking in the woodlands of Angmering and Michelgrove Parks.

Back atop the South Downs Way, I parted company with Andy and Jen – who returned to pack up at the small, basic and rather lovely campsite – while I whizzed back along the Downs to Brighton, assisted greatly by a robust tail wind.

On the way back, coming from the opposite direction along the South Downs Way, I encountered a friendly French chap  who was pushing his ancient steel-framed racing bike, laden with panniers, uphill into the teeth of the wind. Despite the Sysphean nature of his endeavour (many more hills to come), he seemed to be enjoying himself, which goes to show that off-road cycling isn’t all about super-light bikes and state of the art kit. Rather him than me though.