Saturday was to be our first walk for a long time. In fact, writesofway had hardly left the house at all for the previous five weeks – having had a guidebook manuscript to finish. Where to go, what to do? I fancied a walk somewhere in Dumfriesshire – there’s masses of excellent walking country and it’s just over an hour’s drive from Glasgow. Friday night, I rootled through James’s back catalogue and decided to hijack a route he’d walked from Durisdeer in the southern Lowther Hills last winter. I fancied tackling the route in the opposite direction to James, primarily to enjoy the descent towards Durisdeer from Wether Hill at the end. I checked the weather, employing the trusty blueskyscotland TM system of looking for the sun symbol the night before then checking that it was still there the next morning before setting off. It was. Game on!

Myself and the lovely Fiona started out from the very pictureque village of Durisdeer at about 10.30, heading south-east along a track leading into Glenaggart. It was a sunny, but blowy old morning and a thin blanket of cloud was scudding across the hilltops at speed. We soon overtook a large posse of third-age ramblers progressing in a stately fashion up the glen as the track began to climb quite steeply. A short while later there was the unmistakable noise of a quadbike haring up the track behind us. I know you need to keep your momentum on steep inclines, but you could tell this chap wouldn’t have slowed down for us even on the flat. I imagined the fate of the aged ramblers further down the track who might not have got out of his way quick enough… He flew past without acknowledging us, sporting a shiny new barbour, flat cap and shotgun. Not the gamekeeper though, I’ll wager. He had the never-had-to-do-a-day’s-work look of the landed classes, so I imagine that this was a little Buccleuch.

A few minutes later, the booming report of his shotgun came echoing down the glen. Remarkably, given the zero-tolerance approach to wildlife on this estate (of which more later), he’d found some unfortunate critter to blast into extinction. Anyway, we continued up the glen until we arrived at the Kettleton Byre bothy. Maintenance of the bothy is now looked after by the MBA, and it has been extensively refurbished. It’ a lovely wee billet.

We continued into the stiff breeze on our way across Blackhill Moss, pausing to admire the view down along the Kettleton Burn. 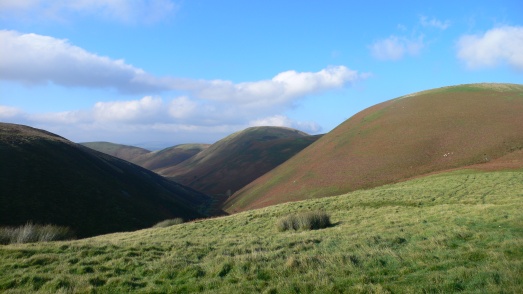 We passed by an abandoned cottage and sheep fanks, before crossing over the Glenleith Burn. The burns descending either side of Berry Rig soon came into view.

Arriving by the first of these, Tansley Burn, we started following its course upstream, hoping to pick up the path marked on the map, which follows the burn up to a saddle south of the summit of Wedder Law. Fairly soon we encountered a number of stoat traps on poles and planks across the burn.

They were nasty looking contraptions, which would have had the Grand Inquisitor rubbing his hands with glee. The idea is that your stoat finds this convenient stoat-bridge over the burn, unsuspectingly trots across and… snap! 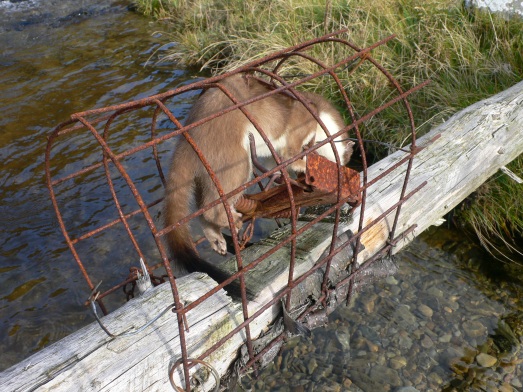 This was one freshly-exterminated stoat. Why take such measures? Because stoat are ‘vermin’ and eat, among other things, grouse eggs. Now this just isn’t on, d’you hear, because then there’ll be a few less grouse for the shooting classes to blast to smithereens. As well as dozens of stoat traps, we encountered a number of large crow traps, rat traps and other traps we weren’t sure about, as well as something that looked like it might be poisoned bait, but being  ignorant city-dwellers, we couldn’t be sure. I wouldn’t have been surprised to find a few man traps aimed at controlling the numbers of the great unwashed out on the hills. I understand the impetus to eradicate rats in areas where they might devastate ground-nesting bird populations, but I’m not sure I go along with the need to annihilate inconvenient wildlife because they might detract from the ‘sporting’ opportunities of a few… You get my point.

The landed classes seem to work on the assumption that British wildlife is theirs to do with as they wish. In most cases they’re within the law when they’re out hunting, or their gamekeepers are trapping stoats, crows etc but often they’re not. I used to go hunt saboteuring in my youth, down in Sussex and Kent. I’ve seen a pack of hounds tear a badger to bits and they’re protected; the police weren’t interested. I also once found a badger caught in an (illegal) gin trap on grouse-shooting land; it was dead and had obviously tried to gnaw through it’s own leg to escape.

More recently I’ve seen a hunt pursuing a fox, down in Sussex, which is still actually illegal until the Coalition of Doom re-legalises it.  But the law sometimes seems to evaporate where the ‘elite’  are concerned. Some ‘sporting’ estates have been prosecuted for persecuting protected birds of prey, but that’s ok because the gamekeeper usually carries the can. I’m sure a lot of it goes on.

Then there was the case of Prince Harry and his posh mate William Van Cutsem allegedly shooting two hen harriers at Sandringham. Two of these endagered birds were shot in flight, and this was observed by a warden at Dersingham Bog nature reserve and two members of the public. Harry and company were the only people in the area with guns, but they denied any knowledge. Must have been a smear campaign by loony lefty animal lovers.

Anyway, on with the walk. We soon began climbing along the faint path alongside Tansley Burn. It was fairly difficult going, but we were reasonably well sheltered from the wind. 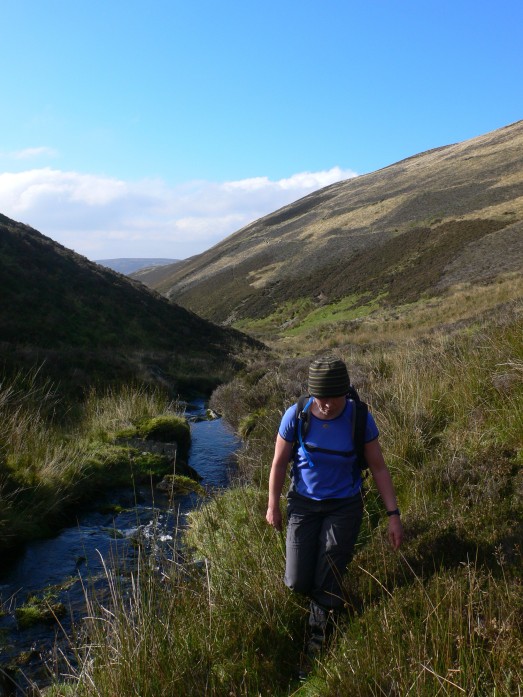 At the head of the burn we emerged onto the saddle between Wedder Law (672m) and Gana Hill (668m). Here we turned north-west and picked up a track running alongside the fence that continued up and over the summit of Wedder Law. Fiona paused to admire the view as if she were a subject in a Caspar David Friedrich painting. 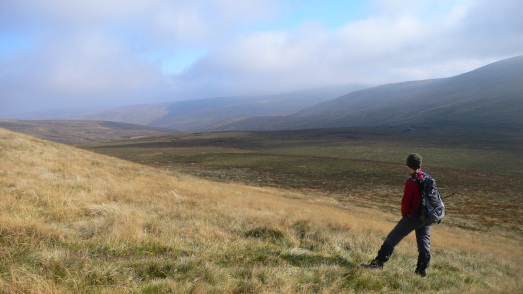 Not being Donald-baggers (thanks for the tip, James), we ignored the track heading west fom near the summit of Wedder Law to Glenleith Hill and continued along the track by the fence. We descended 100m, negotiated some boggy ground and climbed alongside the fence, which now supplemented an impressive dry stane wall. We followed the wall as it continued up and then along the summits of Scaw’d Law (663m), Little Scaw’d Law (594m) and Durisdeer Hill (568m).

The views opened up across the Lowther Hills to the north, with the ‘golf ball’ radar station atop Lowther Hill visible in the distance.

Soon we were descending steeply off Durisdeer Hill to the old Roman road at the pass below Well Hill. 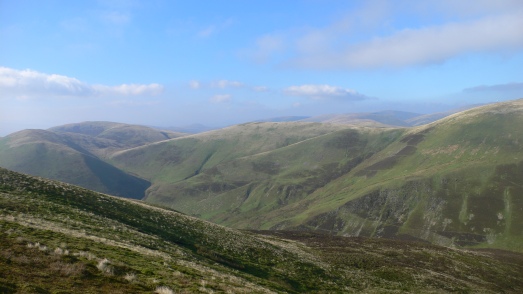 Not having been for a big walk for a while, we were both feeling our legs a bit by this point and from the top of the Roman road we could just have rolled all the way back down the glen to Durisdeer. We were never going to do this though, not when we could climb 200 metres straight up the ridiculously steep south-east flank of Well Hill (606m). This we did and by the time we reached the summit it felt more like Un-Well Hill (sorry).

This group of hills between the Dalveen and Durisdeer passes are real favourites of mine. They’re steeper-sided with narrower summits than the open moorland tops of the hills further east and have the beautiful ‘blunt, bow-headed, whale-backed’ forms that I suppose remind me of the South Downs – just on a larger scale. The views are wonderful too, over the Lowther Hills and out across Nithsdale and Galloway.

From Well Hill, we descended to the top of Stonycleuch Rig and then contoured around Turn Hill, following a stock fence. Descending to Glenbo Hass, we then followed a track to the trig point at the top of Black Hill (531m). From here it was mostly downhill, we descended over Wether Hill and our thighs and knees began complaining at the steep gradient. We continued down to the valley, crossed the Kirk Burn, climbed a little to the Wald Path, which runs along the course of the old Roman road, and returned to Durisdeer. 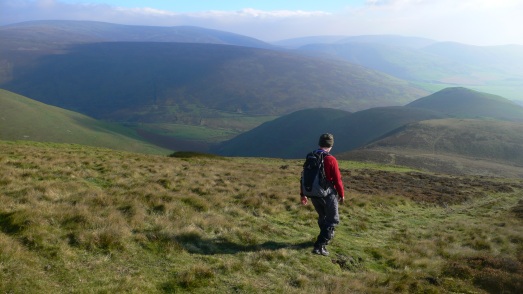 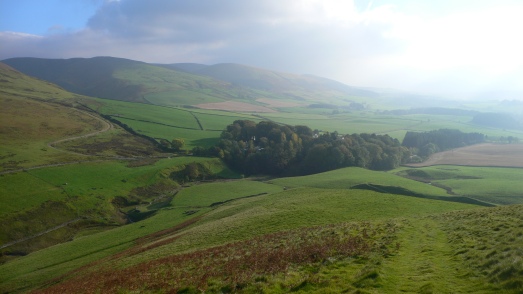 Despite the depressing animal traps, it had been a truly excellent walk in fine but breezy autumn weather, a real antidote to weeks stuck at home in computerworld. Twelve miles with 1100 metres of up and down after sitting on my backside for five weeks; I’m feeling it today as I’m sat on my backside once again, writing this.