Morning dawned cold and clear, a patina of frost on the fly sheets of our tents. The forecast was good for the day, though conditions were expected to deterioate significantly that night. What can you do? Off we set to enjoy our remaining allotment of sunshine and clear skies.

The tide was in, covering the mudflats of Learadail and there was more water coming down the Abhainn a Ghlean Duirch than I’d seen in a long while. A little hoppity-skippity was needed to get across the burn.

I’ve done the walk out from Cruib to the head of Loch Tarbert so many times I could almost do it with my eyes closed, except of course I’d be swallowed by a man-eating bog if I did. Anyway, the walk out was fairly uneventful except for a bit of a rough scramble down through some woods along the steep escarpment flanking the west side of the head of the loch. More hoppity-skippity to cross the Abhaill Ghlean Aoistail.

We worked our way around to the Tarbert Estate’s boat house where I left the others to enjoy a brew while I headed off to the Tarbert Shed on the Long Road. The shed is a shelter and store where groceries, newspapers etc are delivered by the Jura Bus for the few folk living at the tiny settlement of Tarbert. I had cunningly arranged for the estimable Konrad – Jura Bus driver and talented photographer – to deliver some groceries here for us, thereby saving us from hauling three days’ supplies over the hills the previous day. The groceries ordered from the Jura Stores were supplemented by two fantastic loaves of pumpernickel bread baked by the lovely Denise Rozga – who has recently set up a small bakery supplying folk on Jura and some on Islay too. Denise’s bread is excellent and reason enough to visit Jura itself! Thanks Konrad, thanks Denise.

Re-provisioned, we set off along the south shore of Loch Tarbert, before taking to the hills above the estuarine shoreline where it becomes unwalkable. Not that the hills are much easier. There are deer paths in places, but it really is a festival of tussocks around these parts. The going was tough and it soon transpired that Jen had wrenched her knee, swalllowed some painkillers and kept quite about it. Now though, it was apparent that the whole tussock-world experience was causing her some grief and she was carrying a bit of a limp. After descending the precipitous slopes of Creag Lathaich and crossing the mother of all tussock-fields, it was with some relief that we finally descended to the shoreline again, where the walking was perhaps 1,000,000% easier. 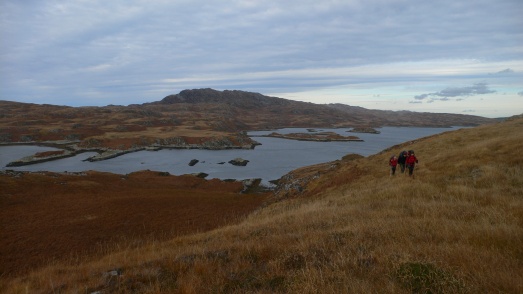 We carried on around the shore and variously crossed the dam and outflow of the loch at Cairidh Mor, before enjoying a rest and some sarnies made with Denise’s superlative pumpernickel bread. Excellent bread for backpacking as it’s dense, moist and keeps really well. Restored, we headed up and over to the stupendous raised beach at Maol an t-Sornaich, which serves as a natural dam for the eponymous loch. This beach really is a marvel.

…before we set off again along the shore. 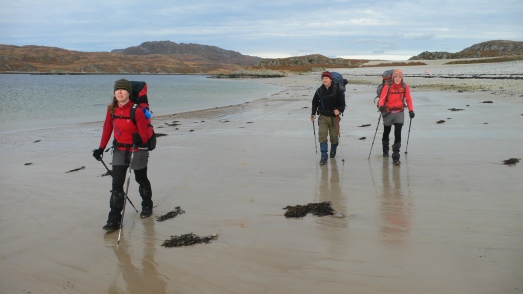 Crossing the outflow of the Abhainn Luindale can sometimes be a challenge, but on this occasion it was a doddle, which was a bit strange considering how much water was coming off the hills elsewhere.

We continued along the shore, greatly aided by the fact that the tide was right out. Our progress to Glenbatrick went without incident, other than watching an otter patrolling along Loch Tarbert and me stuffing my entire ley into a booby trapped bog half a mile short of our destination. This was partcularly annoying as I’d managed to keep my feet dryish all day – an unprecedented phenomenon on Jura! We were glad to finally arrive at Glenbatrick Bay and as Lord Astor wasn’t at home, we pitched our tents in front of Glenbatrick Lodge, which made a handy windbreak from the stiff breeze that was blowing down Glen Batrick. The sky had begun to look ominous, so we hastily went in search of some driftwood. We managed to find a fair amount and Andy got a good blaze going in the nearby fire pit that I’d made nearly five years ago and which still gets used, I’m happy to report. 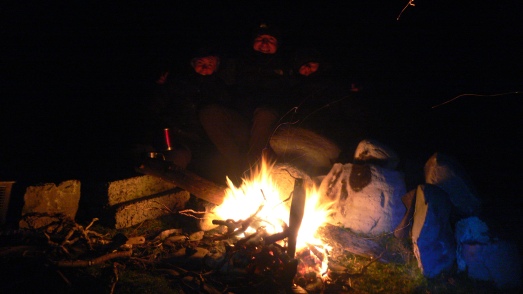 The wind really began to pick up and it was soon driving sheets of rain down the glen. It was time to toddle off to bed and do what the great James Boulter would do in the circumstances: snuggle into our soft downy sleeping bags while the wind and rain whipped against our flysheets. 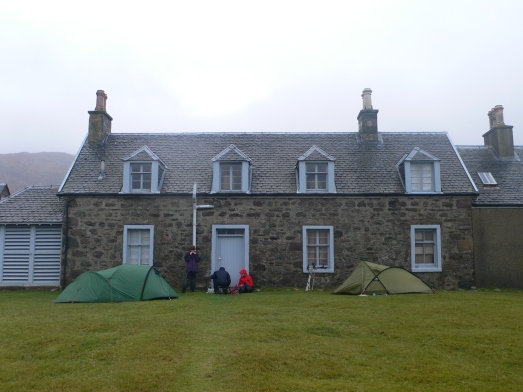 There were two inches of rainwater in my tea mug the next morning. We had planned either to knock off a Pap – probably Beinn an Oir or walk around the coast to Feolin Ferry, but though the rain had eased off, it was still windy and frankly conditions looked pants. We had a conflab and decided to bail out via Glen Batrick – the path of least resistance. Or so we thought. The walk out to the Long Road usually takes around three hours and we felt like we’d put enough legwork in to justify a night at the Jura Hotel. First we needed to eat lots of bacon and pumpernickel bread sarnies, masterfully prepared by Jen on Lord Astor’s doorstep.

Stoked-up, we struck camp and set off up the glen. Glen Batrick can be a boggy morass at the best of times and Evans’ Walk – one of the island’s few footpaths – is usually a sketchy affair in its lower reaches. Today, however, it was completely submerged. There was an extraordinary volume of water coming off the hills, I’ve never seen anything like it here. It reminded myself and Andy of walking the Dusky Track in New Zealand’s Fiordland, where much of the time was spent with our lower halves underwater. 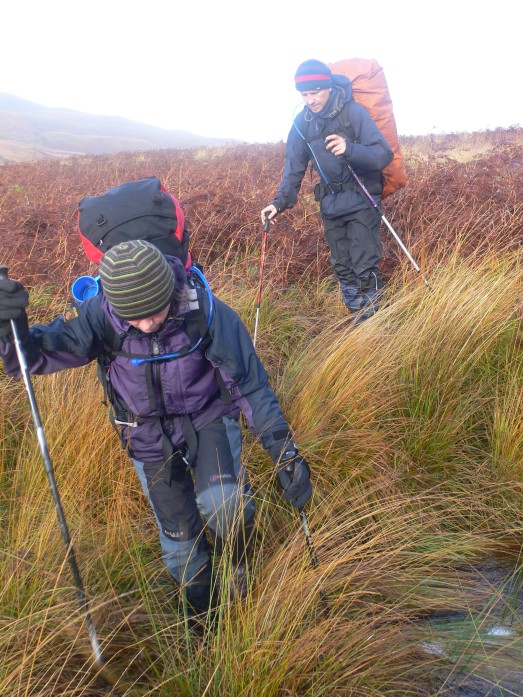 So, we quickly inured ourselves to the idea of wet feet. What we weren’t prepared for though, was the fact that we wouldn’t be able to cross the Allt Teanga nan Abhainn where it converges with the Glenbatrick River. This is normally just a matter of stepping across the burn by way of a couple of rocks. Not today it wasn’t. The burn was hugely swollen, very fast moving and totally unfordable. Boo. 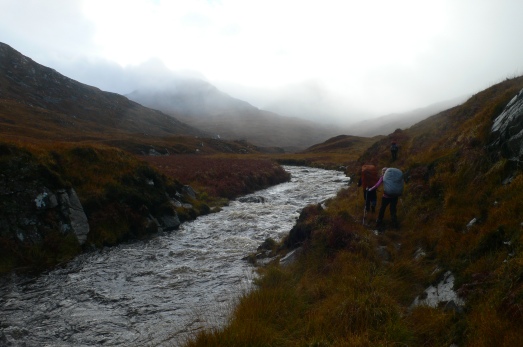 The only thing for it was to continue up along the side of the Allt Teanga nan Abhainn and find somewhere to cross further up. This was hard work as there was no longer even a token gesture in the direction of a path and the terrain was very rough with close heather cover and very sloppy peat. We checked out a number of potential crossing points by means of rocks amid the tumbling tumult of water. Nothing doing. Every possibility was far too difficult and dangerous, slipping would most likely result in death or serious injury.

On and up we went until we came to a point where another burn fed into the river. We would now have to cross two tumultuous torrents – if we could.  The first was actually okay as it wasn’t too wide, but the second was none too clever. It looked risky.  Andy took off his pack and leapt from one rock to another mid-stream, then onto the far bank. The plan was that Andy would stand on the mid-stream rock,  I would then hold on to Fiona and Jen in turn, before they leapt across to Andy and then onto the bank; I would then hurl the packs over to Andy before making the leap myself. It was a big jump and slipping was not going to be funny. Fiona wasn’t happy about the prospect and with complete justification. However, The rain had come down again and the alternative would be to climb ever higher on tough terrain to the saddle between Beinn Shiantaidh and Beinn an Oir, this would then involve a long walk out in poor conditions. I have to own up to putting pressure on Fiona to jump, because I was sure she could do it and I trusted Andy to catch her. Which he did. When it came to my turn, I found it difficult to find the nerve to do it myself. Fiona was quite shaken by the experience and I’m very grateful for the fact that she doesn’t appear to hold the whole thing against me. Obviously you don’t take photographs at a time like this.

We then contoured around beneath Corra Bheinn befor eventually picking up the Evans’ Walk path again, beneath the waterfalls on the Abhainn Loch na Fudarlaich. It was great to have the path again. The river was absolutely in spate and the lochs along the saddle between Corra Bheinn and Beinn Bhreac were overflowing their banks. Still we were feeling a bit more relaxed and looking forward to the usual hot bath, hot drink, hot dinner, cold drinks scenario at the hotel. There was just the matter of one more thundering torrent to cross before we got there. This one involved a lot of walking up and down to find a non-lethal crossing point, which was achieved by more death-defying leaps from the pint-sized Norseman and the use of the old human chain. Once over, there was just the matter of squelching through the last kilometre of bog before we hit the road.

The walk from Glenbatrick Bay usually takes three hours. It had taken us five and it might have taken a whole lot longer…