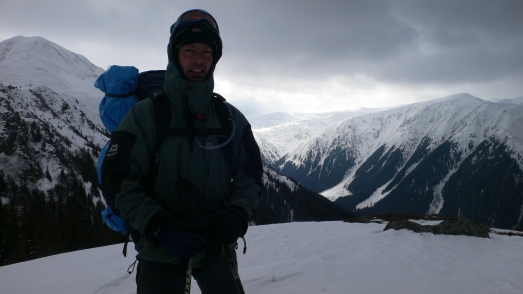 This one may contravene trading standard regulations as ‘adventure’ is a bit of a misnomer. Transylvanian Misadventure might be a more accurate representation of events. Don’t worry yourselves too much on our part though. The trip did end with a hideous double fracture and ankle dislocation, but this was suffered by Arsenal’s Eduardo Da Silva as the result of a horrendous late tackle by Birmingham City’s Martin Taylor – news of which reached us in Brasov on our way home.

The misadventure in question resulted from Matt and myself assuming that all 2000 metre mountains in Romania – with the exception of the mighty and majestic Fagaras Crest – could be tackled during winter with snow shoes alone. Ho hum.

It was February 2008 and if you’ve read the earlier Transylvanian instalments, you may see a pattern emerging. The previous summer, Matt and his cousin Guy had picked up where myself and Matt had finished up the previous winter – Boita, near the River Olt at the western end of the Fagaras ridge. They launched themselves up the ridge and bailed out again after climbing Moldoveanu (2544m) – Romania’s highest peak.

Myself and Matt would resume the route at the town of Victoria, to the north of the Fagaras ridge, where he and Guy had finally abandoned their feet – so to speak – in favour of hitching a lift. The plan was to forge a route east at the foot of the Fagaras, before turning south and climbing up along a ridge to cross the main Fagaras ridge, then following another ridge south to eventually arrive at the town of Campulung.

The first day went to plan. We took a taxi from Sibiu to Victoria and then walked for some hours along snow and ice-covered track roads to an odd collection of buildings, which rather strikingly juxtaposed the sacred and the profane. The magnificently pious Brancoveanu Monastery had a collection of alpine chalet-esque hotels as its neighbours. We elected to stay in one of the latter and merely visit the former, rather than the other way round – not least as we felt this would maximise our chances of getting to watch Arsenal’s  Champions League tie with AC Milan that very evening. Not a single satellite dish was visible among the spires, bell towers and crenellations of the monastery.

It was a fine monastery indeed and well worth a visit. Brancoveanu is one of the region’s famed ‘painted monasteries’, noted for the extensive frecoes and murals adorning the walls. Perhaps we should have read this particular mural as a warning:

Arsenal beat Milan 2-0, but that was where the luck ran out. The following morning we were up very early and on our way before dawn. I don’t remember much about that morning except that we had to wend a convoluted route before we arrived at our turning point. We then began a long, arduous climb up to then along the ridge, which we hoped to follow up to and over the main Fagaras ridge. As we gained height, the snow became deeper and we broke out the snow shoes. There were large areas of devastated woodland, which looked to have been decimated by some extreme weather rather than as the result of forestry work, but it was hard to tell for sure.

The day drew on and we eventually decided to pitch up for the night. It was very, very cold.

After striking camp in the morning, we  continued on our way, following our path through dense woodlands – having to work our way over, under or round many shattered tree trunks at first. As we climbed, the tree cover eventually thinned and the snow deepened. Note Matt’s deeply impractical sleeping mats strapped to backpack:

We eventually cleared the tree line and were presented with a slight issue. 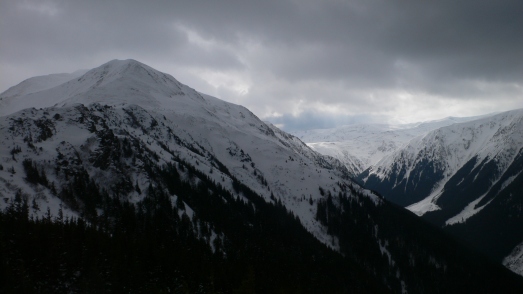 These here hills were just a little bit too pointy for snow shoes. What we really needed at this point was ice axes and crampons, which we didn’t have. We had traversed ridges with 2000 metre+ summits the previous winter without problems – other than the weather of course – but those ridges had been broader and smoother. The topographic relief on Matt’s map gave no reason to think that this ridge would be any, well, pointier. Matt might just have considered risking it, but there was no way I was going to. Once again the retreat was sounded and we turned around and headed whence we came.

A long, long descent ensued and we eventually camped by a stream near the foot of the ridge. It was another cold, cold night.

The following day we had a long, tedious, awkward walk out to a village called Breaza, I think, before we organised a lift to Fagaras train station; thence on to the much-admired medieval city of Brasov – where we could console ourselves with a bit of culture at the theatre.

We may have been thwarted on this occasion, but we would be back. Maybe summer might be better for tackling large pointy mountain ridges…