The Bulloughs in question are Sir George, Lady Monica, their daughter, Hermione and Sir George’s father,  John. All of them are interred in this imposing and somewhat grandiose Grecian mausoleum at Harris Bay on the wild and wonderful isle of Rum in the Inner Hebrides.

The legacy of the Bulloughs is unavoidable on the isle of Rum, so I though I’d write a post about just that before moving on to the business of our recent walking endeavours on this magnificent island.

The isle of Rum was owned by the Bulloughs – father then son – between 1888 and 1957, but the echoes of their 69 year tenure continue to resonate around the island’s mountains, glens and wild shores. During the early decades of the twentieth century, Rum was known as the Forbidden Island; it was used by Sir George and his guests as a sporting estate and unauthorised visitors were vigorously discouraged. However, as we will see, in many ways the Bullough’s legacy has been of great benefit of the island, its small community and splendid wildlife.

The following is a draft extract from my forthcoming (May 2012) Cicerone guide to walking on Rum and the Small Isles – you don’t have to read it all, but I hope you’ll enjoy some of the pics:

In 1888 Rum was acquired by John Bullough, a cotton machinery manufacturer and self-made millionaire from Accrington in Lancashire who had previously leased the island’s shooting rights. The prospectus for the 1888 sale described Rum as ‘the most picturesque of the islands which lie off the west coast of Scotland, it is altogether a property of exceptional attractions… as a sporting estate it has at present few equals’. At this time the population, numbering between 60 and 70 people, were either shepherds or estate workers and their families. When Bullough died in 1891 he was buried at Harris Bay in an ostentatious mausoleum cut into the rock under an octagonal stone tower. This was later demolished and his sarcophagus moved to a new mausoleum in the form of a Greek temple, which still stands at Harris today. After his death, ownership of the island was assumed by his son, George Bullough. 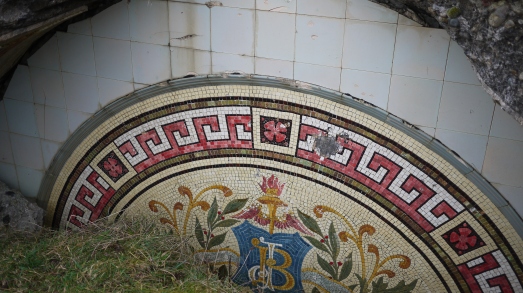 Part of the tiled interior of the original mausoleum

Legend has it that a tactless guest of Sir George Bullough observed that the original mausoleum was redolent of a public lavatory in Waterloo Station. Sir George had his father’s sandstone sarcophagus removed and promptly dynamited the offending structure. John Bullough’s remains were finally interred in the neoclassical edifice constructed nearby in Harris Bay, where Sir George and his wife would eventually join him.

Sir George Bullough – he was knighted in 1901 – changed the traditional spelling of the island’s name to Rhum in 1905; allegedly to avoid the dipsomaniac connotations in the title Laird of Rum. The spelling reverted to Rum in 1992 when Scottish National Heritage took over from the Nature Conservancy Council in 1992, though it is still sometimes referred to as ‘Rhum’. However, Sir George’s most striking legacy to the island is the incongrous and often maligned Kinloch Castle.

Building began in the last years of the nineteenth century and was completed in 1902. The castle was built from red sandstone quarried at Annan in Dumfriesshire, with a hundred stonemasons and craftsmen brought from Lancashire to carry out the construction. Sir George purportedly insisted that the the workforce wear kilts of Rum tweed, for which they were paid extra.

With the castle completed the estate employed around 100 people, including fourteen under-gardeners to maintain the extensive grounds that included a nine-hole golf course, a bowling green, tennis and racquets courts, heated ornamental turtle and alligator ponds and an aviary housing birds of paradise and humming birds. Soil for the grounds was imported from Ayrshire and grapes, peaches, nectarines and figs were grown in the estate’s glasshouses. The interior boasted an orchestrion – a mechanical contrivance that could simulate the sounds of brass, drum and woodwind – an air-conditioned billiards room and an ingenious and elaborate central heating system, which fed piping hot water to the Heath Robinson-esque bathroom, replete with ‘jacuzzi’, while also heating the glasshouses and ornamental ponds.

Sir George and Lady Bullough usually resided at Kinloch Castle during the stalking season and would entertain their wealthy and important guests in some style. Deer stalking was of course one of the primary diversions for the Bullough’s and their guests and a day’s stalking on the hill would be followed by a sumptuous evening meal served at the dining suite, which had originally graced the state rooms of Sir George’s yacht Rhouma. After dinner the company would repair to the magnificent ballroom, with its highly polished sprung floors and cut glass chandelier, to dance the night away.

This exalted era drew to a close with the coming of the Great War. Most of the estate’s male staff went to Flanders and many never came back. The estate fell into disrepair during the war and as Britain’s fortunes declined in the post-war years, the Bullough finances also gradually dwindled, along with their interest in visiting Rum. Sir George died in France in July 1939 – he was interred in the family mausoleum at Harris Bay. His widow continued to visit Rum as late as 1954. She died in 1967, aged 98, and was buried next to her husband in the mausoleum at Harris. In 1957 Lady Bullough had sold the whole island, save for the Mausoleum, but including the castle and its contents, to the Nature Conservancy Council for the ‘knock-down price of £23,000’ on the understanding that it would be used as a National Nature Reserve.

In March 2010, SNH agreed the handover of Kinloch Village to the Isle of Rum Community Trust to provide land for housing and local enterprises.

So ends the extract. Today, the castle is maintained by the SNH who are having to fight an epic battle just to stand still as the running costs are enormous and the increasingly urgent refurbishment work runs into many millions of pounds.

Part of the castle is given over to a hostel for walkers, geology students and other visitors. It is also possible to stay in some of the castle’s oak panelled bedrooms, which are kept pretty much as they were when the Bullough’s were still in situ.

Oh, and if you’ve had a tough day’s walking on the hills, there’s a wonderful little bar to relax in. Worth visiting in winter, just so you can enjoy the fire.

Ok, the next Rum post will be along at some point in the not too distant future. I promise you a bit more of this… 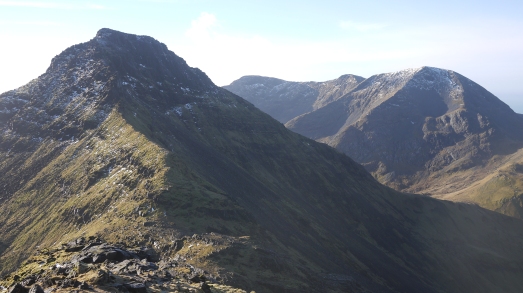 …and considerably more of that: