I woke early, as is my wont, after another rip-roaring night’s sleep. The previous evening I had decided that today I would continue around the coast for a few miles before crossing the bealach between Sron an t-Saighdeir and Bloodstone Hill then descending into Glen Giurdil and making for the lovely Giurdil bothy – one of Scotland’s very finest. This should take three or so hours – I had another plan for the afternoon.

The boys were still sleeping as I slipped out of my tent and got a brew going on the trangia. The morning was dry, bright and cloudy and it looked as if it might stay that way for a while at least. James and Rich had planned a slow start before tackling Ard Nev and Orval from the Harris-Kinloch track road; I aimed to get away fairly sharpish, but I thought I’d have a wee wander around before breakfast. I was extremely glad I did; virtually all of the island’s tiny herd of 20-odd Rum ponies were grazing on the vegetation around the massive raised beach sitting above the bay. These are a wonderful breed, which are likely descended from ponies brought to the island by Norse settlers around the tenth century. They are very distinctive looking species; stocky with a dark eel stripe along their backs and zebra stripes on their forelegs. They are also very friendly beasts and it was a curiously moving experience standing all alone above this wild and remote Hebridean shore as these beautiful animals gathered around me claiming pats, strokes and soothing words. The Rum ponies are used to carry deer carcasses off the hill during the stalking season, but for the rest of the year they are free to roam wild. Here’s a link with a bit more info.

I went back to the tents and the boys were soon stirring. I packed up and I was off by 9am, crossing the outflow of the Glen Duian River and passing  Sir George Bullough’s imposing and ever so slightly bombastic mausoleum.

A herd of rather handsome Highland coos were grazing the environs of the mausoleum. They’re very big beasts with huge pointy horns, but as they had no calves I knew not to be afraid. Years ago, The Lovely Fiona had asked a farmer on Skye whether his Highland coos presented any danger to ramblerkind; ‘Ach no hen’, he replied, ‘they cannae see you through all that hair’. 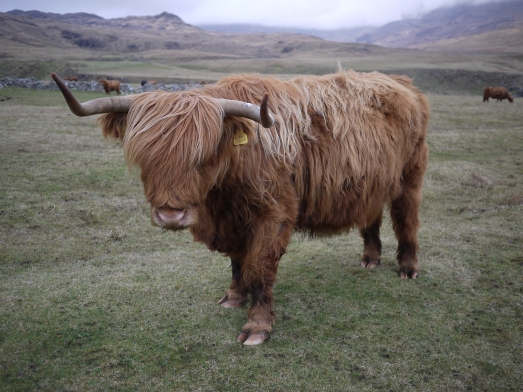 I set off up the wee hill climbing above the north-western end of Harris Bay; my pack felt heavy and my calf muscles were grumbling – it must have been the previous days’ walks taking their toll. I staggered along making hard work of a not especially demanding route above the high cliffs of Rum’s north-west coast; the light remained bright as the view on to Canna and the Outer Hebs opened up.

Eventually, I’d worked my way around to the bealach where I enjoyed a fine view on to Orval and Fionchra, which is the hill to the left of the Bealach a Bhraig Bhig in the picture below. 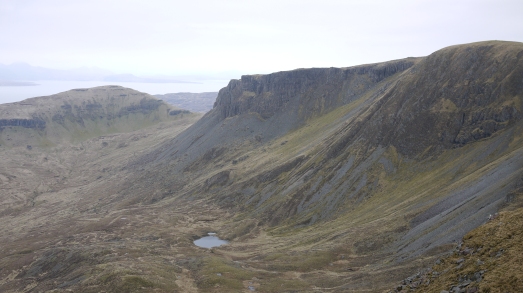 I couldn’t make up my mind whether to dump my pack and whizz up and around Sron an t-Saighdeir and Orval, returning via the bealach to collect it before descending the glen to the bothy or whether to go to the bothy first. In the end I opted for the latter, which entailed more walking, but at least I could have a brew and stuff my waterproofs etc in my emptied pack.

I’d read a recommended route that suggested following the course of a burn that flows down into the glen from a small lochan on the bealach. I tried it and it was hard work even in relatively dry conditions; I think it would be positively dangerous after heavy rain, so no points to whoever came up with that one. Anyway, I battled my way down the glen and arrived at the wonderful bothy slightly irked, but otherwise intact.

Nobody was home at the bothy and it had been left in immaculate order, which is always a gladdening experience. However, some eejit or eejits had left a supply of firewood, which they had obviously removed forcibly from a nearby enclosure where the young trees and shrubs have a tough enough job of surviving as it is.

Pondering the dichotomies of human nature, I lurched back up the glen; this time I climbed steeply up the NE flank of Bloodstone Hill before contouring around to the bealach once more. From here I followed the old pony path that skirts around the head of the valley for a short distance before choosing a line to launch myself up toward the summit of Sron an t-Saighdeir. The north-east ridge provided an obvious choice though there was no sign that anyone else had felt the same in recent years. The climb was an even, steepish gradient on moderately rough – boggy, tussocky, rock strewn – terrain; not the most edifying of climbs, but no real bother.

The broad, boulder-strewn summit plateau is marked with a cairn and there are fine views along the ridge to Orval and the Rum Cuillin to the south. The weather was still holding up as I scampered along the ridge before climbing a short way to the lovely rounded summit of Orval, which is marked with a cairn and a ‘vannessa’ pillar trig point. To the south-east, across a fairly shallow bealach stood Ard Nev. Rather than being a heavily-tattooed tough nut, Ard Nev is in fact a rather lovely whale-backed hill, which provides surely the best views on to the Rum Cuillin to be found anywhere on the island. 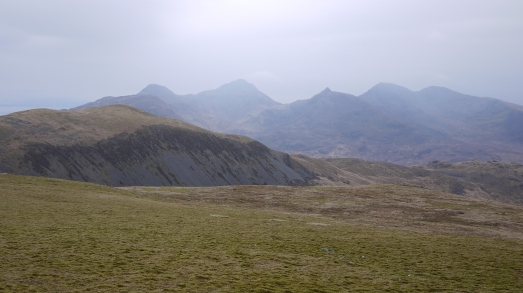 Ard Nev with the Rum Cuillin beyond

As I gazed admiringly at the splendid mountain panorama, two figures popped up on to the summit of Ard Nev; James and Rich for sure. I didn’t quite feel I had the legs to go to join them, so I loitered around on Orval admiring the views in every direction. This was the view back down Glen Giurdil, with Bloodstone Hill and Canna beyond:

I saw the boys descending to the bealach, so I loitered some more, but somehow  we managed to miss each other. Mountains eh? So off I jolly well descended to the Bealach a Bhraigh Bhig, which lies between Orval and Fionchra and which is crossed by the pony path that snakes a course from Malcolm’s Bridge to Bloodstone Hill. Reaching the bealach, I initially followed the pony path before diving directly into the glen, keeping to the right of the river.

I was back at the bothy in the blink of an eye, half expecting that the boys had out-flanked me, but there was no-one home. I got a brew on in time to hand a steaming mug of tea to Rich as he came through the door. James was a little way back, his knee having decided to give him a little grief on the way down from the hill. I went a short way back up the glen to shoulder James’ pack for the last stretch (aren’t I good!) and he handed it over in the manner of a man in discomfort. Poor lad. He’s definitely not a moaner though. I caught a couple of discreet winces from him over the course of the trip and he kept it in. I do love a good stoic.

The evening in the bothy was a relaxing and enjoyable affair and we all tottered off up the wooden hill to Beddington, early doors. What would the morning bring weather-wise? The forecast wasn’t good…

Indeed, the day dawned inauspiciously and proceeded to deterioate as the morning wore on. I needed to check out a couple of paths for the guidebook research so I really had no choice other than to go out and get wet. Rich did have a choice, but he rather gamely decided to come along with me. James wisely opted to stay home and rest his troublesome knee.

What to tell? We walked back up the glen – it was wet; we crossed the bealach – it was even wetter; we descended along the track to Malcolm’s Bridge – wetter still; along the Kinloch track – extremely damp; down the Glen Shellesder path – absolutely saturated. No pics on account of the wetness. However, at the outflow of the Glen Shellesder Burn we descended to the shore and spent a while exploring a marvellous region of caves, tunnels, rock arches and waterfalls – which put me in mind of the west coast of Jura. 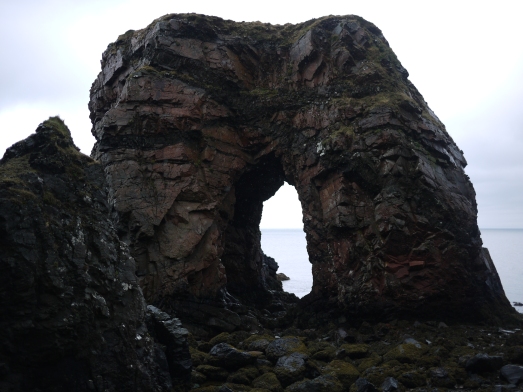 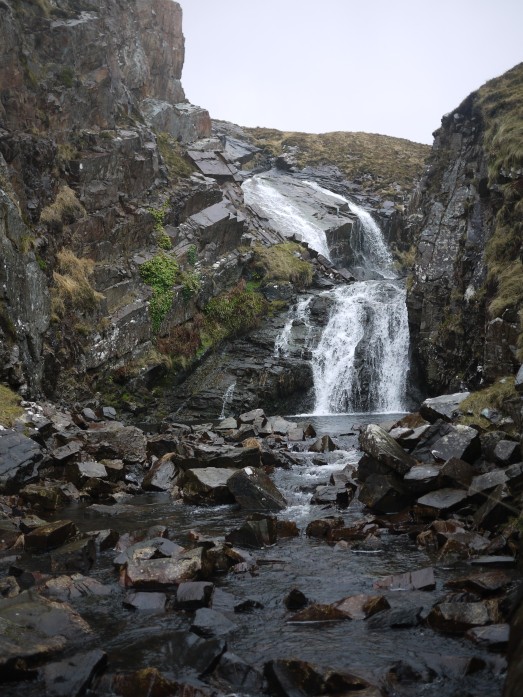 We’d hoped to find some driftwood, but left empty handed. On the way back along the coast to the bothy we bumped into James who had just emerged from his morning’s idling. He sauntered off the way we’d come and returned to the bothy a couple of hours later with a rucksack full of goat poo encrusted driftwood. Good work Mr Boulter.

The weather lifted in the afternoon and we variously explored the environs of the bothy. The late afternoon light was deeply lovely. 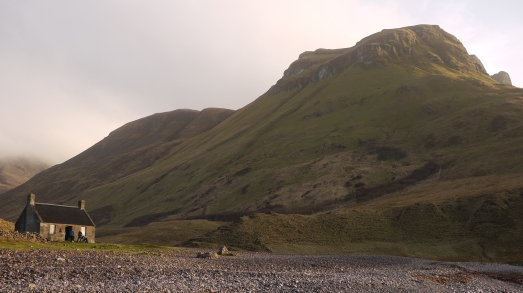 If anyone would like to read an account of our last day’s walk out to Kinloch, I would refer you to James’ vastly superior blog. You can read about the last day’s action in the second part of this wonderful post. However, James didn’t take any pics so here’s a couple to go with it: