The forecast for the coming day wasn’t good. In fact, Don, whom I’d met the previous day had said that the meteorological prognosis was all manner of grim with high winds and lashing rain predicted. I decided to strike camp as my pitch was a bit exposed, but also I thought I’d try walking west along the island’s north coast then south down the west coast and aim to camp among the dunes behind Traigh Bhi, the vast Hebridean beach fringing Balephuil Bay. I wanted to check out the viability of the coastal route for the guidebook and I also felt sure Tiree was ripe for a circumperambulation.

The early morning weather didn’t seem too bad as I set off around the white sand crescent of Balephetrish Bay, rucksack on my back. At the far end of the bay I went through a gate and followed a track past houses and through a farm. The terrain was flat and the going was easy as I skirted along just back from the shore, passing through occasional stock gates along the way. This was all looking straightforward and a bit of a doddle when I arrived at the outflow of a burn by a farmhouse at Clachan Mor. It was too deep to cross so I had to cross some boggy ground, stock fences and a small footbridge up stream to gain the far side. This then entailed walking through a farmyard to get back to the shore. A large farm collie came bounding towards me all hackles, snarls and barks. I tried the ‘hey! how’s it goin’ dude’ approach, but Rover wasn’t impressed. A woman yelled at him from the farmhouse and with a ‘next time, buster’ look over his retreating shoulder, Rover bounded back whence he came. As I continued down the farm track a chap in a blue boiler suit appeared and eyed me with restrained misgiving. I waved and called out a greeting. No response. I tried again. Same as before. I made straight for him and as soon as I was in range I said that I was trying to get back to the shore. He indicated a gate and said to go past some sheds. Which I did. Not openly hostile. But… Tiree is a farmed landscape and at times this means access for walkers and the need for stock fences etc come into conflict. That said, there are only a couple of places where the walkers’ progress around the coast are seriously impeded. With a little effort this could be changed to provide walkers with the opportunity to walk around the entire coastline of the island.

Anyway, I continued on my way and I was soon passing a house near Barna-Sgeir; just beyond the house the vague path was lined for several hundred metres with an assortment of sea bird feathers.

This simple yet very lovely piece of environmental art led down to the outrageously beautiful sandy beach of Traigh Chornaig.

The weather had begun to deterioate; the wind had picked up and bands of rain swept in intermitently, but I wasn’t even slightly put out as the conditions seemed to enhance the sublime coastal landscape as much as the glorious sunshine of the previous day had. I was feeling quietly ecstatic as I strode on along the beach. At its far end I climbed up onto the headland and passed through a couple of gates to continue along the coast.

The walk along this section went okay at first, but then I encountered a few electric stock fences. Well, no bother I’d just be careful and continue on my way skirting the fences where possible and climbing gingerly over where unavoidable. I noticed that an expanse of stock fence had an electric wire running along the inside – presumably to keep stock in – but then also on the outside. Why? I was pondering this when, to avoid a boggy section, I made to edge along the outside of the fence. I got a shock. I’ve got quite a high pain threshold, having experienced a bit over the years, but the the shock I got from this fence provoked a cry of anguish. Not the kind of ‘ouch!’ when you whack your thumb with a hammer, but a throaty, guttural ‘AAAAAAARRRRRGGGHHHH!!!’ that issued from somewhere deep within. I might add that I was a little pissed off about this. I really couldn’t see the need for this sort of sadistic measure on the fecking OUTSIDE of the fence. Furthermore, I then had to cross another electric fence inside a barbed wire fence to descend to the next bay. I thought I was in the Hebrides not behind the Iron Curtain.

Moving swiftly on, literally and metaphorically, I crossed the very lovely beach of Traigh Baile a’ Mhuilinn, before heading a short way up and around the headland of Rubha Boraige Moire. Thankfully this was less fence-infested than the previous headland.

Beyond the headland the coastline turned south and I continued through some dunes to arrive by Traigh Hough. An expanse of large pebbles was built up on the northern end of the beach so I carried on along the dune edge.

For the next few miles I continued on my way along a succession of wonderful sandy bays adorning Tiree’s west coast – their formidable natural beauty lent extra majesty by the buffeting wind and squally showers.

After a brief section along the little road running through the scattered settlement of Sandaig, I followed a winding track across the machair – which looked ready to erupt into bloom imminently – and then descended to the sublime beach of Traigh nan Gilean, with the headland of Ceann a’ Mhara looming above its southern end. 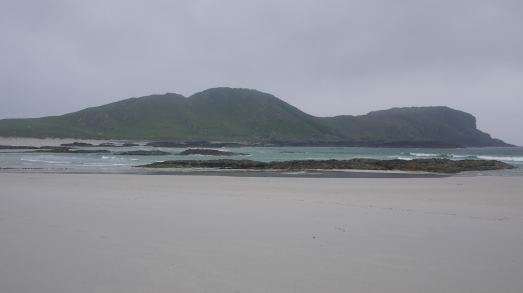 The wind-driven rain was fairly battering down by now, so I put my head down and strode to the far end of the bay. A path leads up across the neck of the headland and at it’s high point there is a great view down onto the dunes and beach at Traigh Bhi, fringing Balephuil Bay. This has to be a contender for finest of all Tiree’s many splendid beaches – you wait ’til you see the sunshine pics! 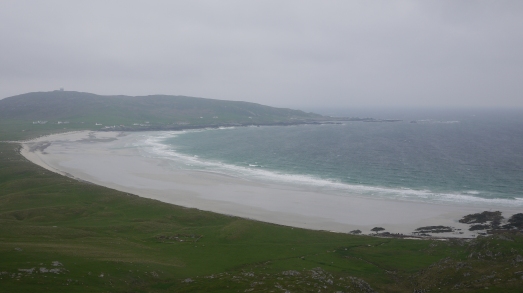 So I scuttled down the hill and picked up a track running through the dunes towards the beach and then continued along the dune-edge on a vague path, keeping a look out for suitable camping spots. Nothing doing. The wind was whipping around all over the shop and nowhere was sheltered. I sat down and munched on a cheese and salami sandwich, which I’d cunningly prepared earlier in the tent and realised I’d lost my – well, Fiona’s actually – lovely blue-framed sunglasses. I’m a bit of a sartorial disater area, but these sunnies were really cool, man. ‘Oh bugger’ I thought and resolved to retrace my steps to find them. Leaving my pack I walked back a couple of miles to no avail. They probably fell off my hood on a beach and were nabbed by the incoming tide. Never mind, it’s only stuff and at least the sun wasn’t shining!

Having decided against spending a wind-rattled night amid the dunes I consulted the map and set my sights on an inlet along the craggy south coast a few miles away between West Hynish and East Hynish. I retrieved my pack and beetled along through the marram grass and down along Traigh Bhi before climbing a short way to the road at Balephuil. I then headed south down the road passing a few houses scattered along the way that collectively constituted West Hynish. I went through a stock gate  to pass the last house and was greeted by it’s occupant, a very warm and hospitable gentleman whose name I think is Hector MacKinnon. Hector filled my water container and offered tea and we had a chat about things including the Gaelic names of the rocks and skerries round about. Hector is a shepherd and I passed his flock in the sheepfold along the way from his house as I left the track road again and rejoined the coast.

This section of the island’s coast is much more rugged than the rest of the island and I kept high to avoid difficulties – following Hector’s counsel – and was soon looking onto the Iron Age dun – or fort – of Dun Shiader, perched on its rocky promontory. I checked the map and saw that a nearby dry stone wall could be followed to the summit of Ben Hynish (126m). As the weather had taken a sudden turn for the slightly better, I dumped my pack and legged it up the hill to admire the view of Tiree laid out beneath me. Well it was a bit murky in truth and scarcely worth the effort, but I skipped back down the hill, shouldered my pack and carried on my way.

The coastline along this stretch has an impressive, rugged beauty to it and I was soon looking down on what would make for a fine camping spot. I descended carefully into Port Snoig and pitched my tent, beginning to feel dog-tired after a long day.

I was a little worried about what the night would bring in terms of weather – remembering Don Maxwell’s doom-laden forecast, but there wasn’t a lot to do about it except brew some tea, rustle up theevening’s tuna fandango and retire to my sleeping bag with Slaughterhouse Five to see how Billy Pilgrim and Montana Wildhack were getting on in their zoo on the planet Tralfamadore…