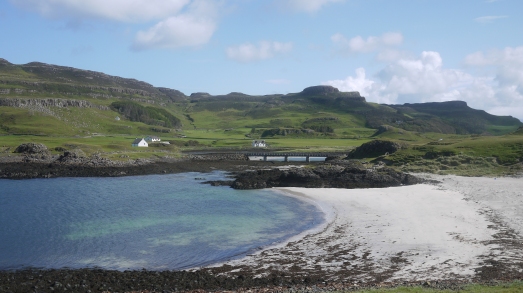 There was no chance that the day after our circumperambulation of Canna could be any more eventful. The Eurohike had stayed up, the wind had dropped over night and dawn was heralded with sunshine and blue skies traversed by lazy flotillas of fluffy white clouds. Perfect conditions for exploring Canna’s tiny, tide-separated sister island of Sanday.

Happily, a new footbridge connects the islands so we didn’t have to wait for low tide to get across. I was intent on an anti-clockwise circumperambulation (the last time I’ll use this word, this year. Promise) of Sanday while the girls and Dougal were content to potter along as their collective whim took them.

Through a gate, across a lovely little sandy beach and I was soon atop the cliff top summit of Tallabric (59m), looking out along the south coast of Sanday to its easternmost headland with the isle of Rum beyond.

Dropping down to the shore again, I  caught a familiar whiff. Several years ago I found a small whale’s skull on Jura and bought it home in my rucksack. It exuded a lot of oil that gave off a very distinctive and not entirely unpleasant odour; a bit soapy, perhaps. That was what I could smell now. I didn’t have the time to search for the source of the smell as we were catching the 2pm ferry to Eigg, but I subsequently learned that a dead whale had been washed ashore and its bones are gently bleaching away on the shore.

The light was lovely, shifting and sparkling, with clouds scurrying across the heavens in evident haste. Sanday was looking very bonny indeed; what a lovely place to be able to call ‘home’.

I saw the girls being dragged along in Dougal’s slipstream near the north coast and Sanday being so small I was able to skip from coast to coast in half a minute to join them briefly. We agreed to rendezvous by the south coast cliffs looking onto the rock stacks of Dun Mor and Dun Beag;  I then set off to continue my route once more. I followed the coast around, followed a dry stone wall to a gate and went through. The ground was pretty boggy around a small reed marsh, where cattle had also churned it up. I picked my way across the morass and was soon able to take to the cliff edge again. Very soon I had my first sight of the remarkable rock stacks.

I upped and downed and upped again along the cliff tops until I was soon stood at the perfect view point onto the stacks. There came the sound of barking from the direction I’d come. I turned to see the girls and Dougal stood on a high cliff top a few hundred metres back. Below them to landward was a small herd of young bullocks who seemed somewhat galvanised by Dougal’s barking. He’s scared of cattle and has yet to grasp that this being the case it’s best not to alert them of your fearful presence. Awruf! Awruf! Barked Dougal in his suprisingly deep tones. Amoo! Amoo! Responded the pesky ruminants as they thundered up the slope towards my stock-still companions. A quick piece of mental arithmetic pointed to impending catastrophe. I threw down my pack and hurtled towards the ill-intentioned bovine phalanx, waving my arms and emitting a roaring, gargling scream that would have put the bejabbers up Stanley Baxter in Zulu. This had an instant effect.

With the coos now safely departed, we were able to continue our walk unmolested. Apologies to the owner of said cattle, but at worst they were mildly perplexed by the whole business and much as the fox enjoys the chase, they too seemed fairly stimulated by the pursuit.

Looking across to Dun Mor, we could see various sea birds nesting on its sheer sides. Puffins nest here from late April, but they make deep burrows so aren’t always apparent around the actual stacks. However, a few hundred metres off-shore several hundred sea birds were floating in several large rafts numbering a hundred and more birds each. Through the bins we could clearly see that they were  indeed puffins. I’d never seen  a solitary one before and then here were hundreds at once. Deep joy.

After extensive observation of our small feathered friends, we set off again. The girls cut straight across the neck of the headland to the north coast and I continued around the headland at a trot.

Looking back on Dun Mor

I soon caught up with the girls along the north coast – in time to get battered by a sudden and intense hail shower (June, fer chrissakes!). After that it was an uneventful stroll along to St. Edwards church…

St. Edwards is deconsecrated and in the early ’90s it was officially opened as a hostel and visitor centre linked to the archive of Gaelic tradition, song and folklore amassed by the island’s former owners, the late John Lorne Campbell and Margaret Fay Shaw. However, the centre has remained locked and unused since. I don’t know, but I suspect and hope that this won’t be the case for many more years.

I continued along the track that skirts around the shore of Sanday’s tidal sand flats, while the girls returned to the bridge via the ‘overland’ route. The route along the shore is passable at low tide.

At the Sanday side of the bridge stands a rather fetching Marian shrine:

My mum is of Irish Catholic descent and I remember there being lots of plaster statues of Jesus and his relatives around the house when I was wee. Frankly, all that stuff used to give me the willies, but I like this stained glass shrine. You don’t have to believe to appreciate religious-inspired art when it’s good.

Anyway, I should have sought divine intercession at the shrine and then maybe the lovely Gille Brighde cafe/restaurant would have been open, but this was a Sunday so we sat outside and pretended we had coffee and cake instead. 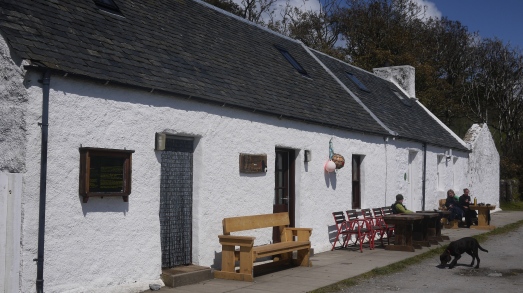 Soon enough we were on the ferry enjoying a relatively unbumpy voyage to Eigg. Ah! Lovely Eigg.

We were met at Galmisdale pier by Phil, a tall and immensely good-natured chap from Altrincham who had relocated to Eigg a year and a half ago with his partner Claire. They have a couple of yurts in their garden and we had one booked for the next four nights. Phil ferried our bags and our Fiona yurtwards and the rest of us walked the two miles along the road towards Cleadale to yurt central.

The yurt made for a great billet for our stay, not least because of the excellent stove, but also because of Phil and Claire’s warm and jolly hospitality.

Late that evening we walked over to Laig Bay at Cleadale to watch the sun set behind Rum. Sunset didn’t really happen, but  the evening was imbued with a pleasant pinky-purpleness, which made the walk worthwhile.

The forecast for the next day was good and we had plans, oh yes…