Muck can be a little awkward to get to from the other Small Isles and I’d had trouble trying to fit it in to the itinerary along with Canna and Eigg. I have to admit that I saw the prospect of visiting Muck as slightly annoying – a bit of a detour just for one walk that didn’t look that interesting.  Muck is very small – even for a Small Isle – it’s possible, so we discovered, to walk around the little critter in its entirety in four or five hours. You can probably see what’s coming – another one of my ‘how wrong can you be?’ posts. How wrong can you be? Muck is very small, but a more idyllic wee island would be hard to find.

We set off from Eigg on the Shearwater, the wee ferry/island cruise boat that sails out of Arisaig. There were a few tense moments as a doomsaying scaremonger was spreading the untruth that the Shearwater was fully booked and then Fiona mislaid her purse etc. But in the end it was all fine, purse found, plenty of space on the boat.

The crossing was very enjoyable; we stopped out in the middle of the Sound of Eigg as the skipper thought we might see some dolphins, but they were a no show. Within an hour we’d arrived at the pier by Port Mor, Muck’s harbour and main settlement.

We headed straight over to the north coast of the island – less than a mile – to pitch our tent on one of the loveliest informal camp sites you could wish for. There is a permanent yurt for hire and a composting toilet, a wee burn for your water and magnificent views of the Rum Cuillin. A friendly family from Southport were staying in the yurt, but ours was the sole tent.

Having pitched, we headed back to Port Mor…

…and made a beeline for the cafe/craft shop to refuel with an outrageously good and incredibly cheap herring salad before starting our circumperambulation. By the time we left it was nearly 3pm!

The plan was simply to walk around the coast staying as close to the shore as natural and man made obstacles allowed. We headed initially south-east out of Port Mor, through a few stock gates and fences onto the low-lying coast. This was easy enough, contouring along on a faint, narrow path avoiding boggy bits, crossing the odd fence, leashing Dougal when sheep or cows were in the vicinity. In truth the coastline of eastermost Muck isn’t all that exciting, but what it does have is some fine views on to Eigg and Rum.

We continued on our way and within an hour we were looking down on our campsite and beyond to the tide-separated islet of Eilean nan Each – Horse Island. 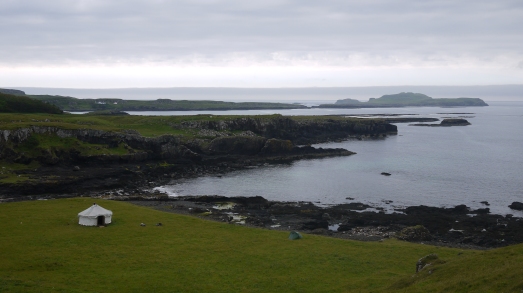 The skies had darkened and a soft, silvery light underlit a blanket  of  low cloud sailing in from the north-west. Would our circumperambulation be scuppered by rain and poor visibility? We’d have to take our chances. Continuing on, we briefly joined the road to Gallanach Farm, which sits above a lovely bay with a fine beach. 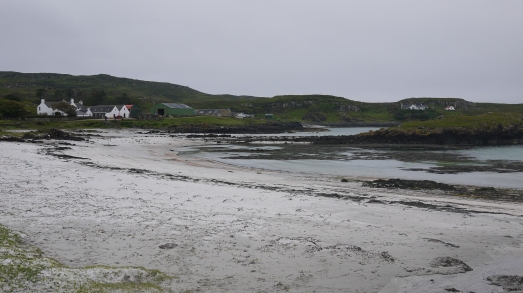 We walked around the bay and followed a path up along the coastline again to walk out along the peninsula of Aird nan Uan. 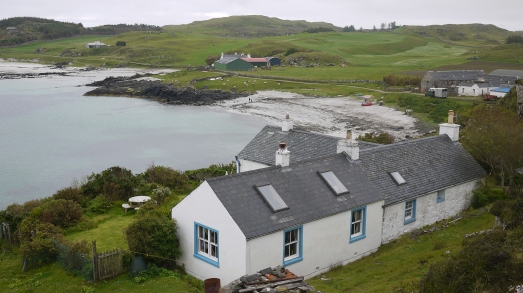 Looking back on Gallanach Bay

The tide was in, so we’d not be able to walk across to Horse Island this time. Next visit for sure. 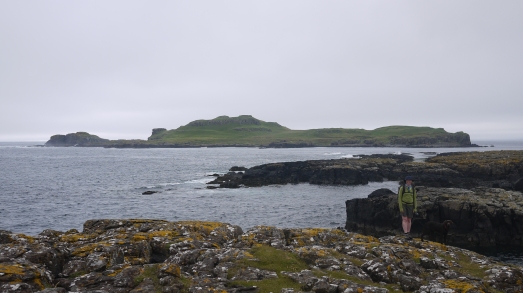 We retraced our steps back along the peninsula and then continued along the coast, passing this rather splendid private bothy – must be a hassle mowing the roof.

Continuing on in the gathering murk, the coastline soon began to take on a different character. The landscape was beginning to look a lot craggier and we soon found ourselves climbing up along the high cliffs of Muck’s west coast. 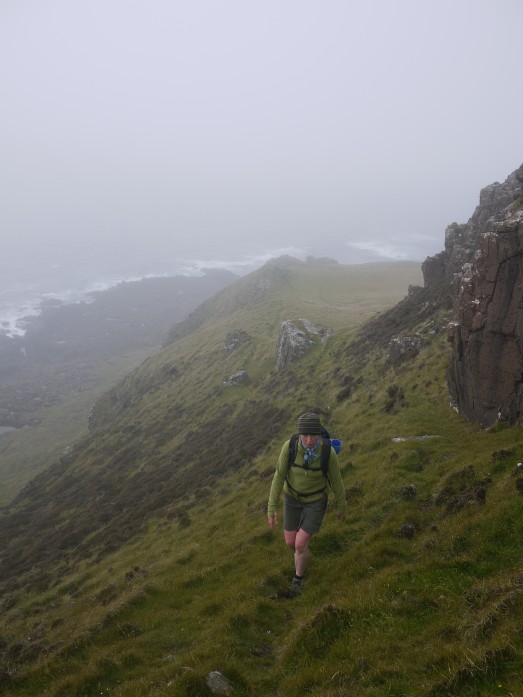 This  was exciting stuff, the coastal landscape of high cliffs and rugged shoreline in the murk made for something of a contrast with the earlier part of the walk. It would have been great to have some views, but at least it wasn’t raining.

We continued, following a narrow path along the agreeably springy-turfed cliff tops and eventually found ourselves beneath the looming bulk of Beinn Airein, rising to 137 metres above the cliffs at Muck’s south-western extremity. The top was shrouded in a mantle of murk as we climbed steeply up the hill’s south-western flank near the cliff edge. This added to the excitement of what had turned into a surprisingly engaging walk.

However, a little too much excitement soon appeared as we arrived on the summit to find the place packed tighter than a can of corned beef with frisky cows. Normally this wouldn’t be an issue, but by ‘normally’ I mean when we went walking before we had Dougal. The big scary Labrador is fwightened of cattle. He is cowphobic, or bovinophobic (natch) to give this terrible malaise its pathologised name. Dougal chooses to express his fear of cattle by barking gruffly and persistently while emitting clouds of tangible fear odour – a combination that whips cows into a wild-eyed murderous frenzy.

Removing ourselves and Dougal from this fraught situation – atop a high cliff in dense murk surrounded by hostile cows – provided a tense couple of minutes. We eventually descended beneath the murk having out-manouvered Dougal’s bovine nemesis 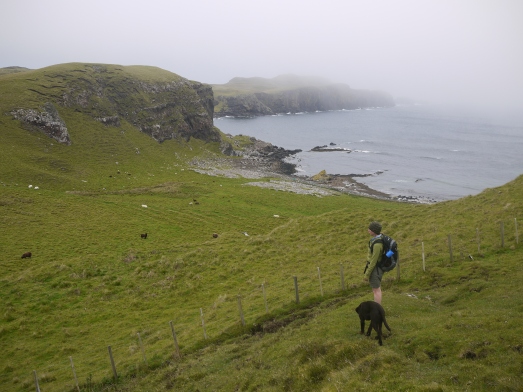 Continuing along the coastline, we had a few more stock fences to negotiate and we were soon feeling fairly knackered. Behind us the clag finally lifted from Beinn Airein. Mysteriously there was no sign of the cows…

We decided to cut directly across the peninsula south-west of Port Mor to return directly to the village. This probably didn’t save us any time or effort as our cross-country route was rough, boggy and tussocky in places. However, we had soon joined the track winding down to Port Mor and we decided to call in at the Port Mor hotel for a pint and some crisps. We’d been told that the hotel’s restaurant was fully booked, so we were happy to sit in the garden enjoying the view out over the harbour while nursing our very welcome pints of ale. We were a bit sweaty and dirty anyway and didn’t want to put anyone off their dinner.

The hotel owner seemed concerned that we would be returning to our tent unfed and wondered if we might like some steamed langoustine followed by pork curry. Yes, we might like that very much we answered and ordered a second pint each to boot. It has to be said that we weren’t charged a great amount for the fine food we were served. We felt well and truly rewarded for our endeavours. It was a lovely evening and we returned to our tent well and truly at peace with the world.

In the morning it was a bit blowy. Our friendly yurt-dwelling neighbours hadn’t slept a wink as the sail cloth fabric of the yurt was quite noisy in the wind. We’d slept soundly and not heard a thing. We packed up and headed back over to Port Mor in search of coffee.

Fiona and Dougal installed themselves at the cafe/gift shop while I headed off round the peninsula that we’d missed out the previous day. I needed to check out the route and take some snaps for guide book purposes.

Near the end of the peninsula the remains of the Iron Age fort of Caisteal an Duin Bhain (castle of the white rock) sit atop a cylindrical upthrust of volcanic rock standing sentinel above the entrance to the harbour of Port Mor.

Further round the peninsula the coastline is rugged and beautiful and I was glad to have had the opportunity to see it in clearer conditions than the previous day’s. 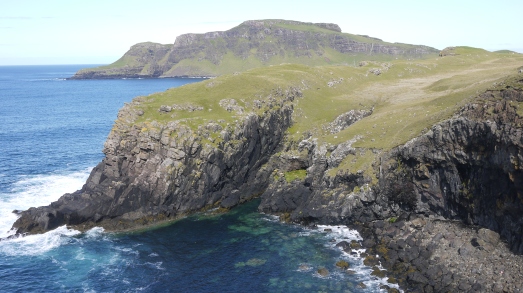 Having walked the remaining stretch of coastline, I headed back to Port Mor and soon enough we were making our way to the pier to catch the ferry back to Mallaig. All in all it had been an excellent 24 hours on the lovely wee isle of Muck.