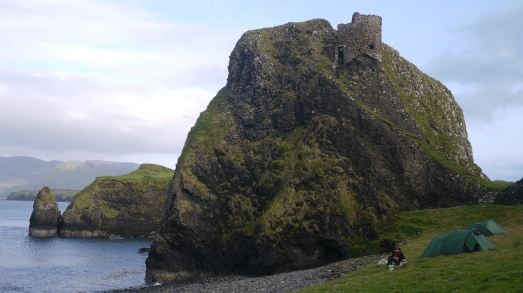 It was a blowy old night in the tents and it was still very windy the next day when we went for a bracing walk along the high cliffs around the island’s coast. It was, however, a long way short of storm conditions otherwise we wouldn’t have been able to undertake our walk along the exposed 200m-high cliffs. When we came back from our walk one of the tents – the XL – had blown into the sea, the Voyager and a Crux two-man tent pitched nearby were unaffected; thankfully our possessions were rescued by the lovely Julie McCabe. Julie and her partner, Stewart Connor – the island’s NTS warden, loaned us sleeping bags (ours were wet) and a cheapo Eurohike tent, thereby rescuing us from our predicament. That night the Eurohike survived a windy night where the £500+ XL had given up the ghost.

In my opinion the tent blew away because of the combination of its larger (than a standard Voyager, for example) profile and its lightweight build. Arguably the tent’s lightweight, titanium pegs are also inadequate to withstand a strong wind. The XL is sold as a four-season tent and claims to have ‘great stability in windy conditions’. It doesn’t.

After two months of correspondence – emails, letters, phone calls – during which various employees of Terra Nova have claimed that I must have failed to peg the tent out properly and even that I should have used pegs other than those supplied (!), I have been offered a 35% discount off a replacement, which I declined. My insistence on a 100% refund was rejected in an email sent this afternoon. They’ve lost a customer, but they obviously don’t care about that.

I’ve always rated the Voyager and I want to be able to buy British products where viable, but I can’t accept such poor treatment from Terra Nova. I don’t have a lot of money and losing an expensive tent like this is a bit of a blow. What a shame that Terra Nova don’t care.