Myself and The Lovely Fiona have been staying in Wales this past week and we were visited at the weekend by intrepid outdoorsman, James Boulter, who popped across from Nottingham for a couple of days’ walking in the Welsh hills. This was a good combining of resources – we supplied the borrowed accommodation and James pitched in with a couple of excellent routes. Aside from the Pembrokeshire coast, the Brecon Beacons, the Glyders and the Carneddau, I’ve done very little walking in Wales, so it was good to be able to tap into James’ extensive knowledge and enjoy the unusual experience of being led on a couple of walks for once.

I’m expecting James to do a post on the walks – maps, eloquent descriptions, excellent pics etc – in a few weeks’ time so I’ll just post a few pics and a general description for now – before I recount a startling event that myself and James witnessed on Sunday towards the end of our walk on Arenig Fawr.

On Saturday we set off for Blaenau Ffestiniog from our base in the Tanat Valley; this was a leisurely drive as we were stuck behind a tractor driver who would surely have pulled over to let us pass if he knew how much we were actually enjoying the stately pace and the opportunity to admire the splendid scenery all the better…

Having parked the motor at Tanygrisiau, just outside Blaenau Ffestiniog, we set off into the cloud-shrouded Moelwyns and entered a haunting landscape of long-abandoned slate quarries and the crumbling edifices of the old quarry works and barracks. The weather certainly seemed to suit the environment. 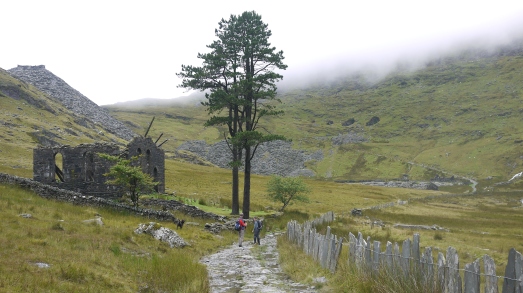 Our route took us past the remains of the Cwmorthin Quarry along the edge of Llyn Cwmorthin and up a steep track past an enormous slate tip and on to the desolate ruins of the barracks at Rhosydd Quarry. 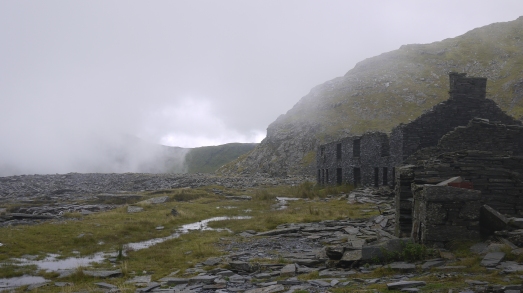 We stopped for a bite to eat and watched the low cloud billowing around the summits of the surrounding hills. Another pair of walkers appeared, looking slightly uncertain – like extras from central casting who aren’t sure that this is indeed the right film set. They exited stage right and we set off shortly after – it wasn’t what you’d call a typical August day, weather wise.

Our route contoured around the flank of Moelwyn Mawr, initially from the north-west, following a vague path across boggy ground. We passed the dammed outflow of Llyn Croesor and were soon looking down on the remains of Croesor Quarry and across to the summit of Cnicht – ‘the Welsh Matterhorn’. 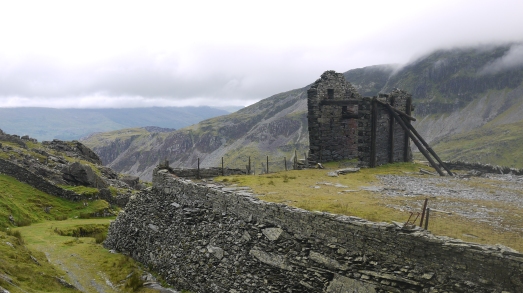 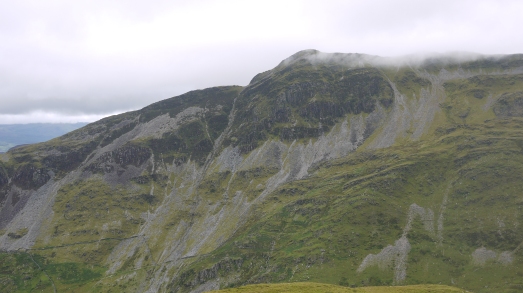 We descended to the old quarry works then contoured around the hill once again, following the course of a dry stone wall before picking up a broad, level path that had once been a tram track. Far below to the north-west, Porthmadog gleamed beneath the low bank of cloud flowing up and over the Moelwyns. 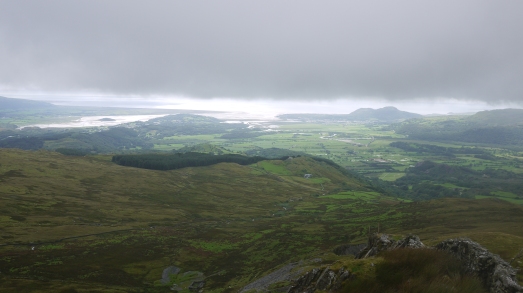 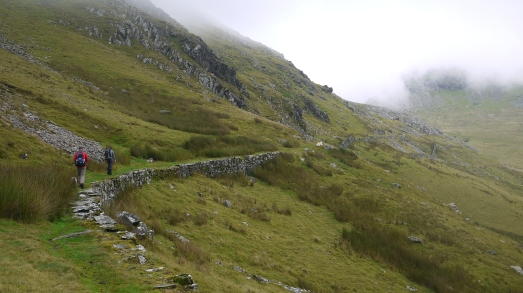 We ambled along the track, scurried over a slate tip and rejoined the tram path a little higher up the flank of the hill.

We continued around to just before Bwlch Stwlan – the pass between Moelwyn Bach and Moelwyn Mawr – then launched an assault on the western ridge of the former. This was tough going as the ground was steep, soft, wet and springy – a bit like trying to climb over a series of very damp matresses! Once on the ridge it was a straightforward climb to the summit on a faint path. As we descended, the same two walkers from central casting that we’d encountered earlier appeared from stage right, making for the summit of Moelwyn Bach.

We descended to Bwlch Stwlan and decided to continue up along the sharp ridge of Craigysgafn to the summit of Moelwyn Mawr. It was a stiff old climb in a real pea-souper. The views would have been great, but hey, it was a grand walk anyhow. James habitually subjects his poor wee Staffie, Reuben, to a bizarre form of humiliation which involves getting the hapless dog to perch on trig points to have his picture taken. I felt it was only fair that Dougal should  demonstrate canine solidarity by doing the same…

Back down the hill we headed, emerging below the swirling cloud cover, making for a path skirting around the southern flank of Moel-yr-hydd. 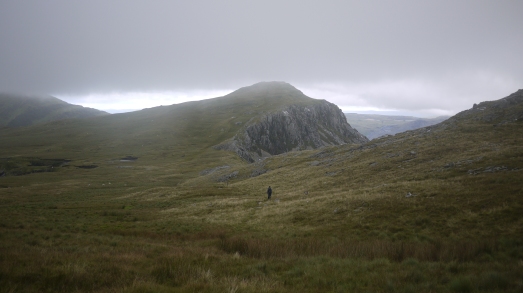 The path was vague in places, but we kept on track and just before arriving at the old quarry on Craig yr Wrysgan, we passed a smallish cave entrance and heard voices emanating from within. We weren’t not going to have a look, so in we went. The entrance opened out into a massive cavern and we could see figures with head torches moving around. Dougal was unsettled and barked at the people – who I assumed were cavers – so I stayed back with him while James and Reuben went for a closer look. There were a lot of people in there, James reported,  all with tinnies or bottles it seemed. Was this the local ‘party cave’? We thought we’d leave the folk to it and continued on to the quarry.

Our descent on a tip of loose slate was interesting and fairly rapid. We were soon back at Cwmorthin and followed the track along the river and down to the car park. It had been a grand walk and the weather hadn’t detracted from our enjoyment one jot. It actually seemed to enhance the austere beauty of this rugged, post-industrial mountain landscape.

The following day, myself James and the dogs set off for a walk on Arenig Fawr, which is around eight or so miles west of Bala. Having parked near Arenig Quarry, we walked back along the road for a mile or so to pick up the path by Pant-yr-Hedydd. The path climbed steadily up through heathland being grazed by sheep.

Ahead of us, a couple were yelling at their dogs a lot. It seemed that the dogs were very interested in the sheep and were running around off the leash. Reuben and Dougal were also off the leash at this point, but we were keeping them close. Reuben is a well-behaved, obedient pooch and James had no problem keeping him to heel despite the wooly temptations all around. Dougal is still a puppy and I thought it good practice to keep him close, off his leash for some of the time, to learn to resist the urge to chase sheep. He was pretty good and when he did briefly bowl off after a couple of woolies, he came back sharpish when called back. There was clearly no intent to chase the sheep down and I thought no harm there, good to get him taught not to chase sheep as it will make both our lives easier when he’s full grown. It’s not always apparent that sheep are around when you’re on a hill and if your dog see’s one before you, you want to be sure that they’ll not chase them or that they’ll come back sharpish when called if they set off after one. The alternative is not good.

Anyway, we followed the path around to the tiny MBA bothy near the outflow of the Llyn Arenig Fawr reservoir before crossing the outflow and continuing on our way.

We followed the ever-steeper path up the Y Castell ridge, catching up with the two people and their dogs in the process. The people were Dutch and very friendly, unlike their dogs – a Jack Russell and some sort of Alsatian cross – the latter pinned Reuben to the ground, but we laughed it off and continued on our way.

We battered our way up to the summit ridge to enjoy the truly panoramic views across the whole of Snowdonia. The cloud had lifted off the summit of Arenig Fawr and we were very pleased with our timing. 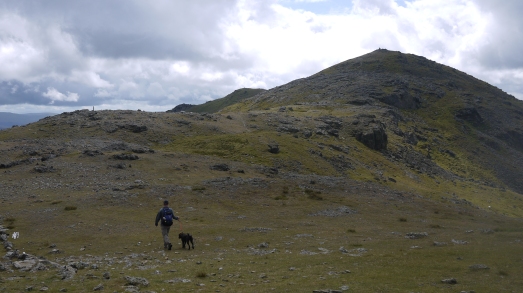 Some other walkers turned up while we were enjoying our sandwiches and they were followed by the Dutch people and their dogs. The feller asked me to take some pictures of him and his wife and then he insisted on taking some pictures of myself and James. We finished our pieces and set off on our way once more.

It was all downhill from here, literally at first as we descended along the ridge to the saddle, and then metaphorically as – half an hour later – we watched a grotesque scene play out in the distance.

Around a kilometre away, back up the ridge we’d just descended we heard barking and saw the Dutch people’s dogs thundering along the flank of the mountain in pursuit of a sheep. Surely, I thought, the owners will call the dogs off – the dogs will pull up, turn tail and head back to their masters having had their fun. But no; the dogs kept up their pursuit, catching the sheep and bringing it down. I pulled out my binoculars and James and I watched the scene unfolding. High up on the shoulder of the hill a tiny figure called  to the dogs who remained utterly heedless of their master’s imprecations. The sheep struggled to stand and attempted to flee the dogs; they pursued and brought it down again. Again the sheep struggled away from the dogs again they bought it down; a cacophany of snarling barks tumbled across the head of the valley towards us. Why is the feller not running down there and getting his dogs off? Still he stood about 750 metres up along the flank of the hill, an occasional call bereft of conviction hanging on the air.

The sheep tumbled like a child’s rag doll over a low cliff and down a steep scree slope, legs akimbo, pitching over and over before finally coming to rest. Surely the poor beast must be dead. The dogs pursued the carcass down the slope and kept up a hoarse and incessant chorus over the broken remains.

We resolved to get down the track to the road as fast as we could to alert the farmer. I think we were also a bit fearfful that our own dogs might be taken as the culprits – two dogs on the hill, one being a Daily Mail-styled ‘devil dog’ and all. Two walkers were ahead of us watching the whole business from the foot of the scree slope. We conferred with them and watched as the poor beast still moved weakly. There was nothing we could do, so we beat our retreat.

Eventually we got back to the road and flagged down a local man who sped off to alert the farmer. It felt a bit grim, but we were convinced that not reporting the incident would be a cop out. We don’t know the outcome, but I’ll bet those Dutch folk will wish they’d kept their dogs leashed. I know I will if I ever have the slightest doubt.