Many times I’ve looked north across the Gulf of Corryvreckan – the infamous kilometre-wide strait separating the isles of Jura and Scarba – and thought about visiting the lonely sea-girt mountain that is Jura’s lesser-known neighbour.

When running my eyes over Scarba’s contours and crenellations my gaze would always come to rest on the tiny outline of the cottage marooned in Gleann a’ Mhaoil – one of only two dwellings on the entire island. On learning that the cottage is in fact an estate bothy, which is open to Joe Public, my resolve to visit was stiffened.

After several attempts we finally got to visit Scarba last Friday. The crossing from Croabh Haven marina took us 30 minutes in the company of Duncan Phillips, skipper of the Farsain. It was a cracking afternoon and Duncan checked the forecast for the weekend. The prognosis was exceptionally good. ‘You should have a magical weekend’, said Duncan.

I’d tried in vain to find a contact number for the Scarba Estate – as we wanted to ensure that there was no stalking place  at the weekend. This was unlikely as the stag stalking season was over and though hinds are stalked until February, weekend stalks are not the norm. Nonetheless, it would be mighty disappointing if we had to turn back. Duncan delivered us to the pier on the island’s north-eastern coast at the southern end of the Sound of Luing – happily there was no-one waiting to tell us that stalking was in progress.

A gradual climb along  the Landrover track lead us to Kilmory Lodge, the island’s only habitation other than the bothy. There were no signs of life – perhaps there was no-one else on the island, then? We continued south, contouring along on the excellent track. There were plenty of fallow deer around and Dougal was a little anguished that he wasn’t allowed to go and ‘play’ with them. After a few pleasant kilometres ambling along and taking in the fine views, we arrived at the head of Gleann a’ Mhaoil. We were now looking down across the Gulf of Corryvreckan to the north-eastern end of Jura; the roof of the bothy soon appeared – always a heart-gladdening sight. The track wound down the glen and as we approached the bothy there was no sign of anyone else in occupation.

There was indeed nobody home. We really were the only people on the island. I have to say that this was an entirely splendid feeling. The bothy has a fine situation and is a well-appointed residence – the first bothy I’ve visited that has replacement uPVC windows (only at the front)! The upstairs rooms were very dusty with lots of crumbly plaster, so we decided to pitch our tent in front of and below the bothy for sleeping. The remaining daylight was used to gather driftwood from the bay; there was plenty to be had so we were really beginning to feel that our luck was in.

There were a couple of dead common seals on the beach, one of which was so recently expired that there was no smell at all – Dougal didn’t even notice it, his eyesight is so bad he probably thought it was a rock. Loaded up with combustible material, we headed back to the bothy and got a fire going. I’ve spent more evenings in front of bothy fires than I’ve spent at home in the last couple of weeks! It’s not a bad old life.

The morning dawned calm and largely clear, though with some cloud hovering over the Firth of Lorn to the west. We were up and about early and set off in good time. An old pony path contours around the south of the island, so we chose a cross-country route that would enable us to take advantage of the path at the earliest opportunity. 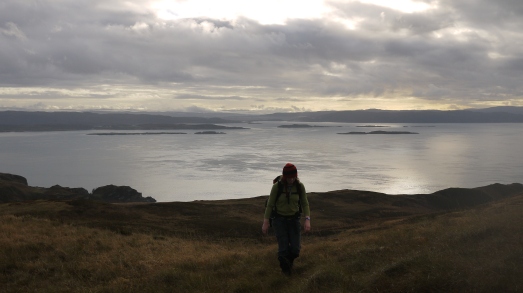 Deer paths helped us on our way as we gained height, crossed a burn and then climbed more steeply to the inflow of Loch Airigh a’ Chruidh. The morning was still and the surface of the loch was placid.

We joined the pony path a short way above the loch and continued contouring initially south west. 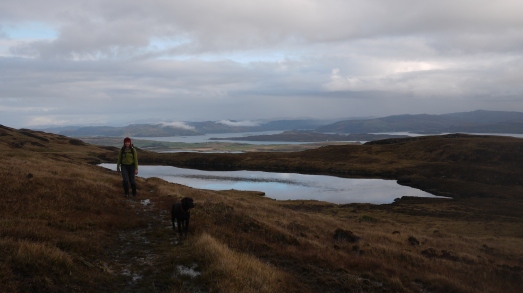 The path climbed a little and as we cleared the rise we were presented with a breathtaking view along the north-west coast of Jura. My pictures can only hint at the grandeur of the vista that lay before us across the Gulf of Corryvreckan. The view honestly tugged at my heart, but then that’s because I love the west coast of Jura with a passion. It was worth coming to Scarba just to have this magnificent perspective on a landscape that I know so well. The mountains, glens and bays stood out in relief in the morning light and we could see the Paps poking above Loch Tarbert 20 miles to the south. Deep joy. 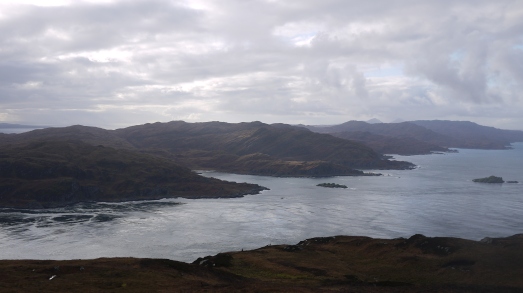 We sat and soaked up the view for a good while until we were feeling a bit chilled – as in cold, not extremely relaxed. Back to the excellent path. 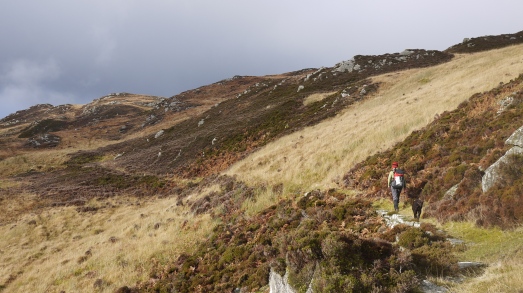 The cloud that had been hovering over the Firth of Lorn had been wafting east and was now snagging on Cruach Scarba, the island’s mountainous summit. A sudden heavy shower had us pulling on our waterproofs and gloves as there was a real chill in the air.

We continued on our way and I was quick to leash Dougal as I spotted some red deer nearby before he did. Again, he was a little tearful at not being allowed to ‘play’. Happily, word must have spread among the island’s deer population that there was a big broon dug on the prowl as we didn’t see any more of the critters until much later when Dougal was too tired for ‘interaction’ anyway.

The pony path soon petered out with just a vague path descending to the north west. It was time to climb. It was still raining, but happily the cloud had blown off the summit of Cruach Scarba; being able to see where you’re going is a great navigational aid, I find. 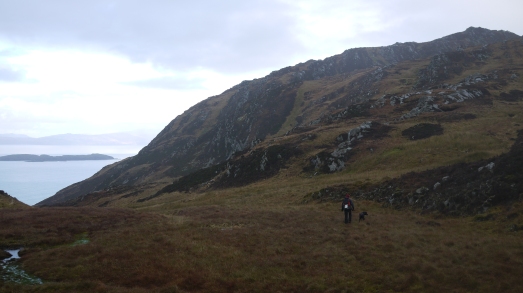 It was a comfortable gradient and our efforts were rewarded with some fine, wild Hebridean vistas.

TLF and Dougal were first to the summit and we hunkered into the shelter of the dry stane wall around the Vanessa  triangulation pillar to enjoy our sandwiches and a wee nip of McAsda’s finest multiple malt, which was justifiable on grounds of the cold! 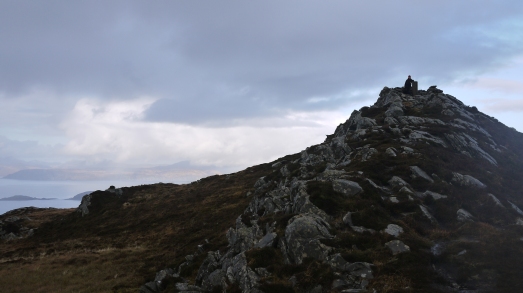 Then something splendid happened. We looked around to the north to see the most enormous, perfect rainbow I’ve ever seen, arching right over the island. I tumbled pell mell back down off the summit to try to take a snap, though I would have probably have to had swum the Corryvreckan and hot-footed it down the spine of Jura to get the whole thing in the frame. Again, pictures fail to do justice. 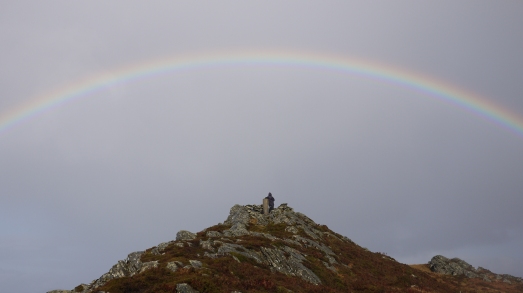 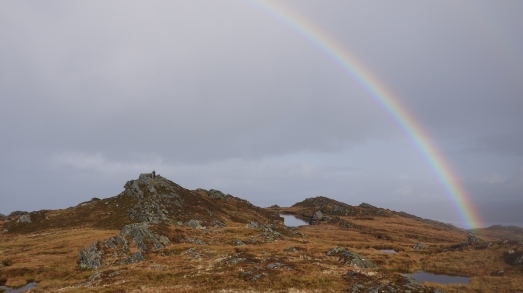 I snapped away for a bit then settled for just sitting and admiring the great natural splendour of it all. Dougal was similarly inclined.

This was some place. There can be few better Hebridean vantage points. We sat a while until we were again a bit chilled, then set off north down the ridge. We spotted a fine looking lochan sitting at about 400m and I should have guessed what was coming. 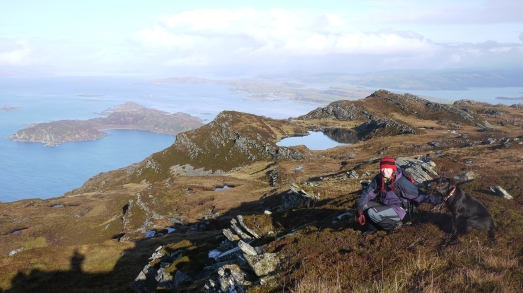 It’s November, it’s cold, we’re at 400m, but that’s just not going to stop TLF jumping out of her clothes and going for a swim. It was, she said, ‘fresh’. 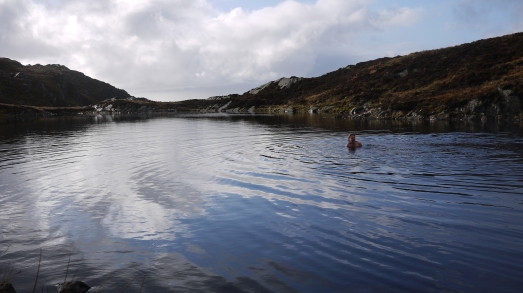 Once TLF had got back into her clothes, we set off down the ridge working a route through the complex terrain. There were fine views across the ‘Slate Isles’ and below us Lunga lay supine and perfect.

To the north west there were grand views across to the Garvellachs and Mull.

We managed to work a good route down and disturbed a golden eagle who wasn’t hanging around to have his picture taken. We eventually found the pony path that contours around the north of the island and we followed that back to join the track near Kilmory. From there we followed the same route out to the bothy that we’d walked the previous afternoon.

It was a lovely evening, so I wandered along the shore to watch the sun set across the Corryvreckan. A young seal was snuffling around in the water a few yards from the shore, but I couldn’t get him to engage in conversation, he just kept on snuffling around intent on his business, completely unperturbed by my presence. Pictures of seals in the water are often rubbish.

Next morning, we exited the tent early and watched the sun rise. It wasn’t a bad start to the day.

We decided to see how far we could get along the coast, west towards the Corryvreckan whirlpool. The whirlpool – the second largest in the Northern Hemisphere after Norway’s Maelstrom – is caused by a sumerged pyrimidal rock 3oo metres off Scarba’s coast, which catalyses the waters flooding into the strait on the flood tide. I’ve looked across the Gulf of Corryvreckan perhaps ten times from Jura and never seen the whirlpool during its spin cycle. However, Duncan had told us that the flood tide was due in the middle of the day, so we set off on our mission with a sense of purpose.

Early on we ran into some wild goats and again Dougal had a good old cry when he was put on his leash. However, he soon got into the spirit of things and enjoyed the exciting walk/scramble above the shore. Unsurprisingly the coastline is not dissimilar to the west coast of Jura so I was entirely in my element. There were caves, basalt dikes and rock arches along the way including this handy little portal, which provided access to the adjoining bay. 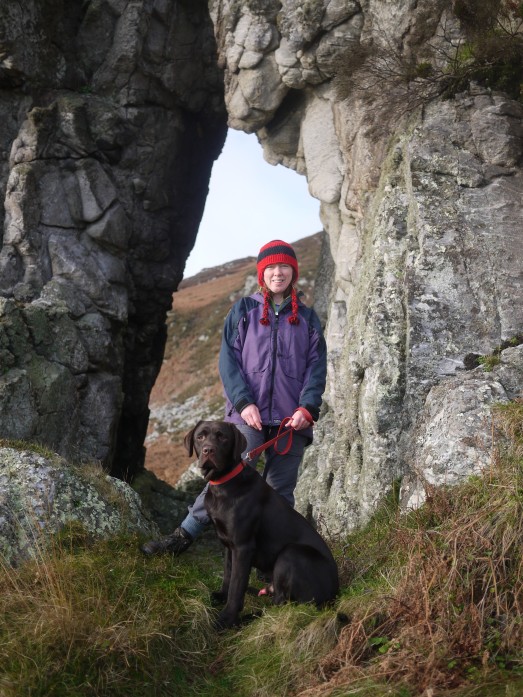 Progress along the coast was hugely entertaining and eventually we chose a ringside seat opposite the whirlpool. It wasn’t fully up to speed and the lack of wind reduced its drama, but it was certainly impressive watching the sinuous currents roiling around the Caillich, or Hag, as she’s known. You can hardly tell from my pictures, so you’ll have to take my word for it. Better still, why not visit yourselves, but check the tide timetables first. 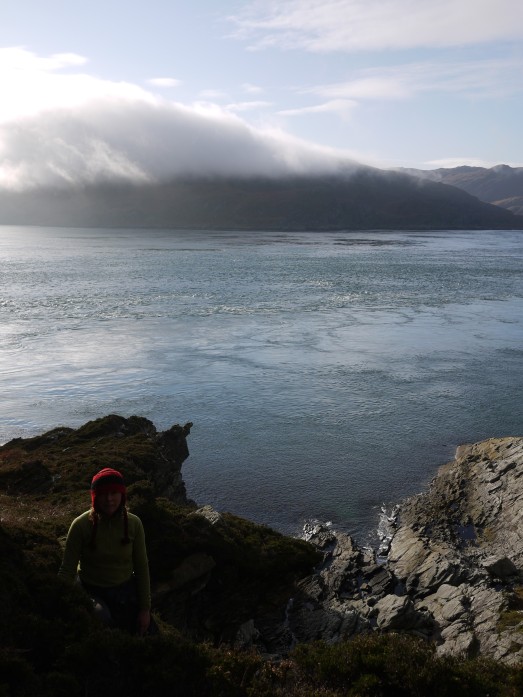 All good things come to an end, however; we were due to be collected by Duncan at 3pm so it was soon time to scramble back along the coast, pack up our stuff and say ‘bye-bye’ to Treasure Island for now. We’ll be back.

The crossing between Scarba and Croabh Haven costs £60 each way. Call Duncan Phillips, skipper of the Farsain, on 07880 714165.