2011 was the wettest year in Scotland since records began. Apparently. Empirical evidence supports this claim; where I live in the leafy West End of Glasgow, the ground hasn’t dried out once all year – not even at the height of ‘summer’. The River Kelvin has been a thundering tumult for much of the year; some days the rain has been fairly constant and it hasn’t even bothered to get properly light before slumping back into drizzly dusk. Still, you can’t be being put off by a bit of weather in Scotland or you’d never leave the house…

We’d planned to go to Jura for a week early doors 2012, and our lovely friends, Konrad and Dorota, who live in Craighouse had loaned us their house while they were on holiday. However, the New Year storms (yep, those ones you saw on the telly) put the dampers on our plans as ferries were cancelled, power lines were down and the entire landmass of Jura had transformed into one huge, man-eating bog. This was something of a disappointment.

What to do? Well, Dumfriesshire is always a good stand-in and we’ve friends who have a wee house there, so we booked ourselves in and motored down the M74 late on Friday morning. We would be picking up our mate Colin from Sanquhar train station at 5.30 so we thought we’d fit in a walk up a hill beforehand.

Parking up by the Daer Reservoir, we louped up Sweetshaw Brae and on to Hods Hill. When we started off there was the very finest hint of moisture in the air so we didn’t bother with waterproof trews. The airborne moisture became progressively more insistent the higher we climbed until we were both soaked through from the nether regions down. So was Dougal, but being a labrador, he embraces dampness. Back down the hill we came at a trot, longing for dry undies. A short way to the north, an array of huge wind turbines have conquered and subjugated Wintercleuch Fell – a sad sight and an increasingly common one in the Southern Uplands. It was too wet for pics, folks.

Having donned dry undies, we drove on over the Mennock Pass to collect Colin, who was late as his train had given up interest at Kilmarnock. Thence on to Kirkland by Moniaive and our billet for the weekend.

Saturday dawned bright and clear – perfect for the plans I had for our day ahead. We drove off to Thornhill and then took the wee back road that skirts beneath the southern Lowther Hills. We parked up by Garroch and exited the car. A very stiff, very cold wind was blowing in from the northwest across the fells – it was going to be a bit breezy out on the tops!

Happed up in many layers, we strode out on the track running alongside the Garroch Water, Dougal tightly leashed to protect him from the sheep. 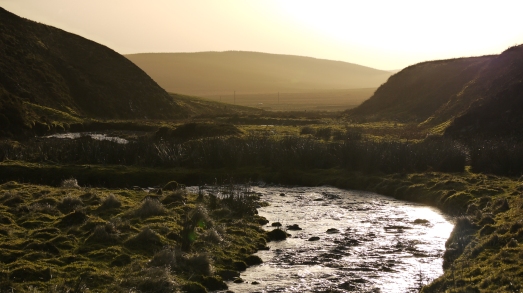 Looking back along Garroch Water from the foot of the glen

There were a number of burns to leap across or splash through and we soon gained height up on to the shoulder of Garroch Fell. The higher we climbed, the fiercer the wind howled down the glen. At the highest point of the track we lurched straight up the flank of the fell through ankle-turning heather. Onwards and upwards we battled with the wind  hitting us broadside, the view was expansive and we could see some weather coming in over the hills to the north west. However, we made it to the summit of Garroch Fell without a battering from wind driven, rain/sleet/hail and took a pause in the lee of the summit cairn.

A short way north east along the ridge we encountered an access track cut into the hillside so that chinless wonders can be landrovered into the grouse-shooting butts of the Buccleuch Estate grouse moors without having to budge their lardy backsides. To cheer ourselves up, we totalled a few stoat traps along the way…

Along the stretch of ridge before Gana Hill we scared up three mountain hares in their winter raiment, how they must be lamenting the lack of snow this year…

As we dropped from the summit of Gana Hill, cleaving to the serpentine ridge, we were whacked side on by the roaring wind once again. We were following the fence along the ridge and I was reminded of how handy those ridge-top dry stone walls and fences can be in this terrain in thick clag.

Aside from the wind, however, conditions were okay and visibility wasn’t too bad at all – we could actually see Queensberry, a result we’d not achieved the last time we climbed it.

Dropping down to Daer Hass, we enjoyed the view down Burley Sike to the Capel Burn flowing south to Mitchellslacks

This view will soon have its own skyline of turbines as the Forest of Ae will have its own wind farm in the near future.

From Daer Hass, we made the short, steep climb to Earncraig Hill where we hunkered in the lee of a dry stane wall for some coffee as the wind brought in a sudden heavy shower of tiny, stinging  ice particles. That was one strategically located wall! Once this scouring shower had passed, we continued over the top of Earncraig and down to the head of the Penbreck Gap.

From the gap we made the steep climb along the fence to Penbreck, while nearly being blown flat several times.

TLF and Colin struggle gamely against the elements

Once atop Penbreck there was just the matter of the final pull up Queensberry to contend with. We steered a course around an expanse of peat hags and battered on with the wind right up us, so to speak.

At the summit we couldn’t even stand up let alone take photos, so it’s left to your imagination to picture the triumphant scene…

The weather ripped along scouring the hilltops and we were all feeling a little sand-blasted and pebble-dashed by the time we got beneath the worst of it.

Anyway, it was now well past lunch o’clock, so we made a beeline for Burleywhag bothy. 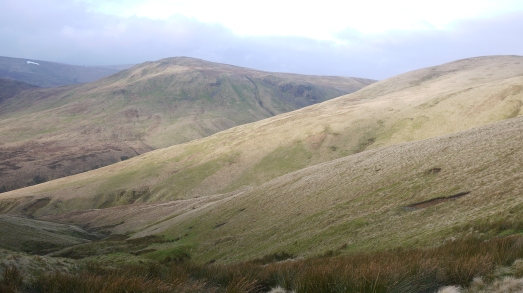 Joy was unconfined when we reached shelter and the promise of imminent sarnies.

Despite being popular with parties of hedonistic young people (I used to be one once, nowdays I’m a hedonistic old fart) Burleywhag was in good shape, I’m happy to report. 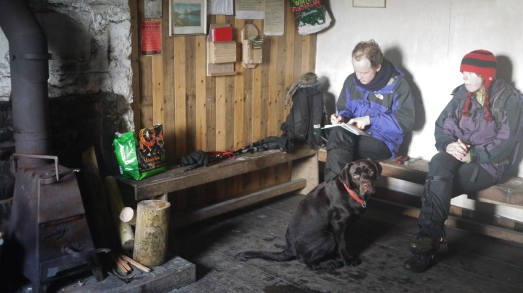 Sandwiches scoffed, all that remained was to stomp the couple of miles down to Mitchelslacks and then a couple more back to Garroch and the car. It had been a fair old walk in some intense weather, but it’s an unbeatable feeling when you’re back home in front of a fire with venison stew bubbling away in the oven and a dram clenched in your paw…

Sunday wasnae so good weatherwise so we just took a gentle daunder up the Chanlock Burn that flows into the Scaur (or Scar as it seems to be called once again) Water. This was very pleasant and totally uneventful. A great opportunity for Dougal to practice his prodigious vertical lift-offs though.

On the way home on Monday, we called in at lovely Durisdeer for a saunter up the Wald Path old Roman road to the head of the glen…

…then back doon again. It’s not a bad old life.