February has been a bit of a bumper month in WoW world. A few days after returning from James’ stag ‘do’ on the unpopulated Hebridean isle of Scarba, I set off for a week on the isle of Lewis with TLF, Dougal and a couple of friends. We had a few walks in mind and aimed to fit some or all of them in around the proclivities of winter weather in the Outer Hebrides. Top of my own list was a walk taking in those of the Uig Hills on the eastern side of Gleann Raonasgail.

The weather was fine and very ‘fresh’ the day after we arrived and it was spent bimbling around several of the many gorgeous beaches adorning the coastline of the Uig region in the south-east of Lewis. We enjoyed grand views of the Uig Hills in beautiful afternoon light, their splendid forms enticing myself and TLF with their ‘come hither’ look.

The forecast for the following day was for cloud cover clearing from the south-west through the morning. This sounded good enough to us, so the following morning we set off early, driving the few miles from Bhaltos, where we were staying, to the start of the long, metalled track that winds its serpentine way up through Gleann Raonasgail. To our delight, it seemed that the hills had received a significant dump of snow during the night, what joy! However, as we approached a thick blanket of clag was beginning to descend, smothering the pristine whiteness in a mantel of deepest grey. Boo.

Perhaps the clag would lift as per the forecast? We ventured forth in hope rather than expectation, striding along the rather overdone and charmless track that provides access to the big hoose at the head of Loch Tamnabhaigh. You can see that you’d need a good track to get vehicles over the bealach between Gleann Raonasgail and Gleann Tamnabhaigh, but you’d think they were expecting the 2nd Panzer Division through…

Anyway, as we progressed up the glen at length, we were feeling that the clag looked settled in. By the time we reached the bealach we decided to climb to the summit of Tamnasbhal at the southern end of the ridge and then just return back along the dreary track; there was little point in battling north along the rugged ridge in the murk, besides, the terrain is very complex, which might pose problems in poor visibility.

We launched directly up to the bealach at Braigh Buidhe and thence along the north-west ridge to the cairn-marked summit. Could hardly see a sausage, but at least we could enjoy walking on squeaky new snow.

At the top we dug out our sarnies and Dougal struck his best ‘good boy’ posture in expectation rather than hope, which was not misplaced.

It had begun to snow again and we were enjoying being out on the hills, visibility or not. We might as well climb Teinneasabhal after returning to the bealach, no? So, we retraced our steps to Braigh Buidhe and began the climb north-east along the ridge. The terrain is rugged and complex, requiring a bit of attention on the route finding front as the snow teemed down. To the south, the clag lifted a little from Tamnasbhal giving us glimpses of the hill we’d just climbed.

Perhaps it might continue to clear after all? We continued to the summit, which is furnished with a cairn of pink and grey granite rocks.

Looming to the north was the steep southern flank of Tathabhal – at 515m, the highest of the hills on this side of the Gleann – we could see it, so surely we should climb it?

The northern flank of Teinneasabhal is steep and craggy, so we descended to the north-east before swinging back to the north west to reach the lochan-dotted bealach. In truth it was quite tricky and we had to lift Dougal down a rocky outcrop en route – when lifting a reluctant 35-kilo Labrador from near head height, make sure that you have very firm footing! We crossed the outflow of the largest lochan and then began the steep climb up the flank of Tathabhal. 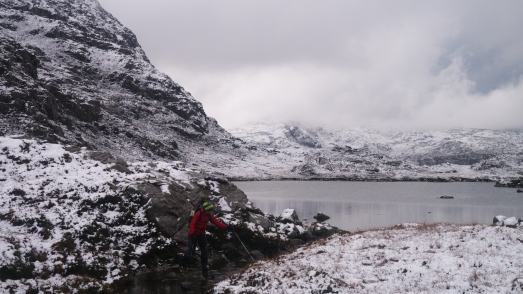 A shallow, grassy gully made the going much easier through the rock-strewn terrain. As we approached the summit, we knew our luck was really in; the cloud really was lifting from the south-west and the views opened up to glorious effect. 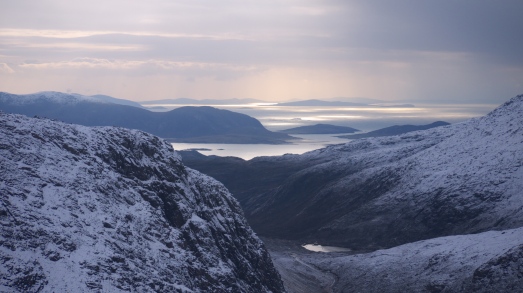 We stayed a while on the summit, drinking in the wondrous views until it was just too bloody cold to stay any longer. Again we descended to the north-east to avoid the steep, craggy southern flank of Tathabhal. The snow and the low winter light made Tarain – the summit to our north – appear much grander than its modest 400-metre stature.

Repeating the familiar pattern, we descended to the north-east before crossing the bealach and climbing along a broad gully before reaching the summit.

There were grand views of Uig Sands to the north…

…but Dougal had had enough of ‘scenery’ for one day: 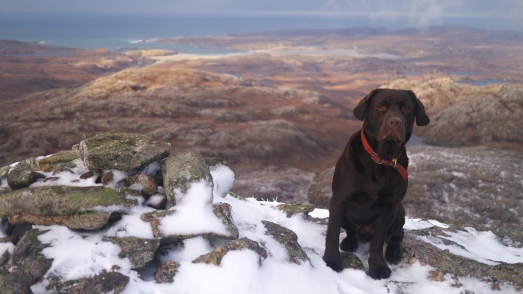 For the last time we descended to the north-east before swinging north-west to arrive at a lochan beneath Cleite Adhamh. From here we parted company with the diminishing ridge, descending along the Allt Uamh Mhircil then crossing the Abhainn Caslabhat, flowing north from Loch Raonasgail. Having crossed the burn we rejoined the boring track, which seemed much longer on the way out, still, better than no track at all!

We enjoyed a couple more walks during our stay and lots of visits to the magnificent mile-long, silver strand of Reef Sands, just a short way from our cottage. 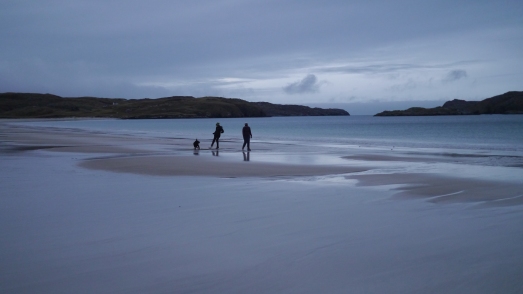 There was plenty of opportunity for Dougal to improve his silky fitba skills:

Has anyone ever seen a dog adopt such a bizarre crouching posture in anticipation of a ball being wellied?