‘Scotland in miniature’ refers of course to the lovely Isle of Arran, which – as the saying goes – contains all the fundamentals of Caledonia in one medium-sized island. If you wanted to nit-pick you might suggest that Arran is rather short on post-industrial landscapes and windfarms, but that’s probably all for the best.

Anyway, last week I enjoyed three days of walking on Arran in the excellent company of my friends Andy and Jen. We had a few walks planned and managed to do two of the three before the weather turned shite on the last day, hence a scrambletastic assault on the Glen Sannox Horseshoe was passed over in favour of stomp around claggy moorland and forest in zero visibility. However, the day we arrived was a real beauty. From the Ardrossan-Brodick ferry, we watched the cap of cloud slowly rolling up off the tops to reveal Goatfell and North Goatfell in all their snow-plastered glory.

After the recent prolonged cold period it was noticeably warmer as we pulled on our packs at Clachan and strode up through the woods and out onto Goatfell’s southern flank. The lower reaches were busy with folk, many with weans, dotting around enjoying the sunshine and scenery, though inevitably there were fewer small people higher up.

There was a fair amount of snow on the south-east ridge and it was noticeably icier as we climbed. We passed a young couple descending with a baby in a papoose-rucksack-thingumy, ‘almost made it to the top’ said the young chap; ‘cripes!’ I thought. A little higher up we passed a group of four early-thirty-somethings with another baby in a papoose-rucksack-thingumy and I wondered if perhaps it was National Climb a Mountain With Your Baby Day.

Near the summit we used our ice axes for a bit of purchase; it seemed likely that beyond the summit there’d be a bit more snow and ice along the ridge between Goatfell and North Goatfell – we had crampons in our packs in case. The thirty-somethings and baby made it to the summit and we all enjoyed the expansive, crystal clear view over to Cir Mhor and Caisteal Abhail. There did indeed seemed to be quite a lot of snow along the Stacach Ridge and the temperature was several degrees below in the breeze. 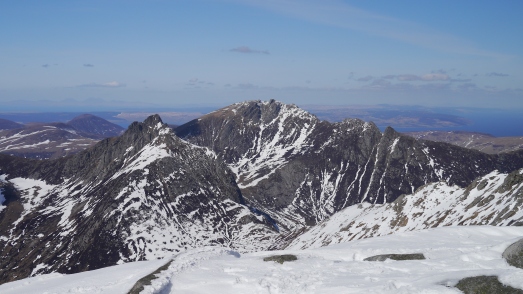 Given that they were not carrying ice-axes and crampons, I assumed that the baby-carrying party would head back down the south-east ridge, but no, on they went along the ridge towards North Goatfell with the baby bawling in his papoose; presumably the poor mite was rather cold strapped in and immobilised as he was. 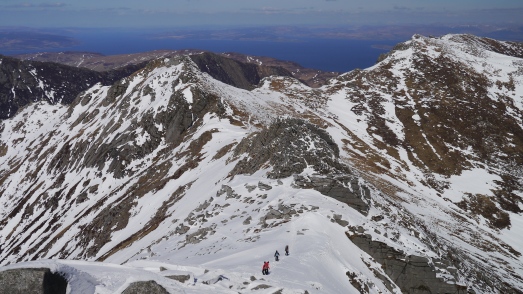 There are several granite tors along the Stachach Ridge, which make for some enjoyable scrambling; a little trickier in winter conditions, but easily bypassed on a well-defined path on the eastern side of the ridge. Surely the Baby Gang would take the easy way? Nope. I’m all for people getting on and doing stuff and not seeing small children as an obstacle, but confident as these people appeared, I felt they were taking a risk with the baby’s safety when not properly equipped. Anyone can slip in these conditions – then what? Given that the recent spate of deaths on Scottish mountains has sparked a debate with some saying that all ‘ramblers’ should be insured or be forced to pay if they’re rescued, it makes such actions look a bit sketchy. As my friend Finlay said: ‘Before I set off into the mountains I look at the conditions and I ask myself should a situation arise where I needed rescuing, would the Mountain Rescue think I was a twat for being there in the first place?’

In this instance the weather was cold though otherwise just about perfect; it’s not that conditions were very difficult or scary either, but I reckon the MR wouldn’t have been happy with these people had they had an accident with the bairn. I have to say that they were really nice, friendly, intelligent young people, but if they’d been from a different demographic taking a similar degree of risk in a different context, someone might have phoned Social Services.

Anyway, we continued along the ridge and I have to say that the scrambling across the tors wasn’t what you’d call a piece of cake; enjoyable, but with a wee bit of an edge. I’m glad I’d decided to not bring Dougal (large broon dug) along. 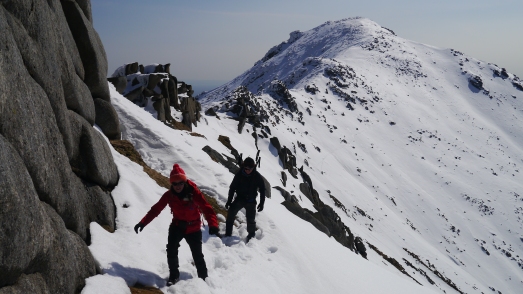 The descent from North Goat Fell down the ridge to The Saddle requires care, but the views are marvelous.

I caught up with the Baby Gang and gave the bairn’s mother my ice axe as she admitted to being on the edge of her comfort zone. They got down to The Saddle safely and when we left them they were debating whether to take the easier, longer route back through Glen Rosa to their car or the shorter route with a tricky scramble down into Glen Sannox and thence to their holiday cottage.

I don’t have kids, but I’d be interested to hear from any outdoors folk who do have offspring about what they think about the line between challenge and risk when it comes to children in the great outdoors. I’m happy to be illuminated!

Looking back to North Goat Fell:

We headed back to Clachan via the very lovely Glen Rosa, but I wasn’t arsed about taking pictures as I was too busy falling through deep snow into burns at regular intervals. Still, here’s a snow free pic of the lovely glen in December:

The next day we walked the lovely whale-backed hills of the Pirnmill Horseshoe over on Arran’s north-west; here’s a zoomed view of the ridge taken from the ridge below North Goatfell:

We had another dry day, with a mixture of sun and cloud; the light was very hazy hence the pics aren’t great as I’m too lazy/stoopid to make the best use of my camera’s talents. Though there was virtually no snow on the east of the ridge – as in the pic above – the western side had a fair old covering. Lower down the snow was very deep in places, evidence of the recent massive dump that shut Arran down just a few weeks ago.

We tottered up to Coire-Fhionn Lochan along the course of the still snow-bound metalled path then climbed to the bealach between Meall Bhig and Beinn Bhreac. Looking down on the loch you could see that it was still partially frozen. Too chilly for a dip anyway. Though TLF may have had a go if she’d been with us.

We climbed south then plodded up along the broad ridge, taking in the unnamed top at 653m before reaching the summit of Beinn Bhreac (711m). 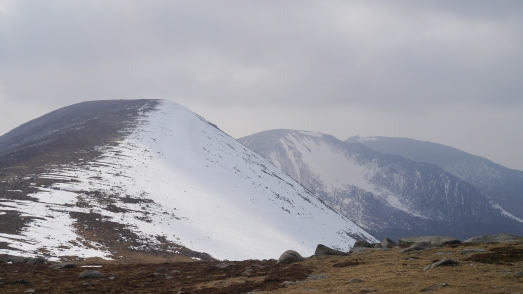 The views were grand except for the blanket of haze washing the colour and definition out of everything. I was a bit miffed about this as I was wanting to bag some pics to illustrate this route, which I hope will go in the Big Book of the Hebrides (yes, I know Arran is not one of the Hebrides). Back in December I’d walked this route with TLF and Dougal, the weather was really wild for much of the way and I managed to get some really cracking pictures of the ridge which really caught the elemental feeling of the vigorous conditions. Except I’d forgotten that I’d left the camera on manual focus and had been snapping away assuming it was on auto. How could I not tell? Well it really was wild and I really do need some reading glasses…

Anyway, we descended to the south-east before reaching the Bealach an Faraidh then swinging west to climb steadily up the flank of Mullach Buidhe (721m), the slightly higher, easternmost summit of Beinn Bharrain. 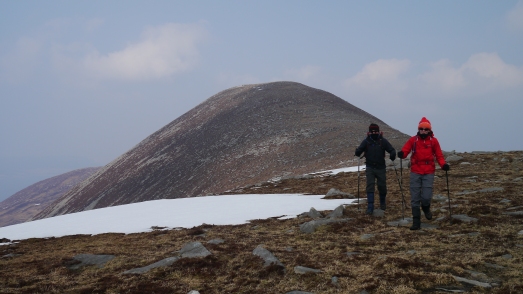 From the summit trig point we continued west along the ridge, dropping a little before climbing up the granite tor guarding the eastern flank of Beinn Bharrain’s western top, Casteal na h-Iolaire, which I believe translates as the Eagles Castle – get you!

From the top (711m) there is a very long and pleasant descent down to the village of Pirnmill on the west coast. After descending the long north ridge of Beinn Bharrain we followed the gorge through which the Allt Gobhlach flows down to the sea; the gorge still held a considerable volume of snow and many of the birch and dwarf oak trees clinging to its sides had been uprooted or had limbs broken by the weight of white stuff. 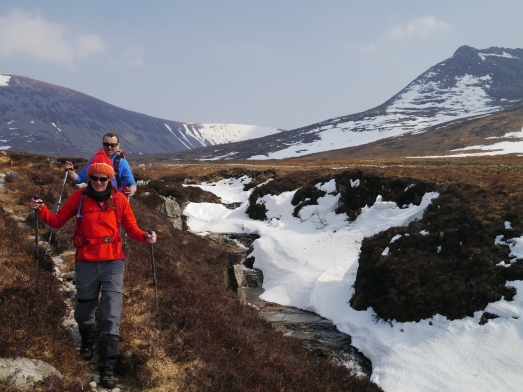 Here’s a view back up the gorge to Beinn Bharrain taken in December:

Arriving at Pirnmill we rested awhile on a bench by the shore and enjoyed a bottle of Arran Ale and a sarnie. Three women with young boys pootled along the shore and when one wee lad got too close to the gently lapping water, his mother bawled him out something rotten. Bit of a contrast with the previous day!

The next day we’d planned to tackle the Glen Sannox Horseshoe – a big, rufty-tufty day out with mucho scrambling, but the weather was shite, so we pootled round boggy moorland and forest in deepest clag. Camera stayed in bag, obviously. Thanks for listening.