A couple of weekends back we set off for a few days walking on Mull. We were lucky with the weather and managed to do all the walks we hoped to combined with a night at Tomsleibhe bothy and another camped on the shore of Loch na Keal. The experience was book-ended by Calmac fish and chips making this a near perfect weekend excursion.

Thursday afternoon we parked up at Pennygown and walked in to Tomsleibhe through Glen Forsa – a nerve-wracking experience for young Dougal who’s really quite scared of Highland coos. His fear is expressed by barking at them, which in turn causes us to fear for our own safety – luckily the brutes can hardly see you through those long fringes. The bothy was empty so we bagged a sleeping platform before climbing the steep north ridge of Beinn Talaidh. It really is very steep to start with, so much so that I had stiff thighs for a few days after the up and down. There are grand views from the summit, though to the west Ben More and A’ Chioch were under a cap of clag. However, to the east the Dun da Ghoaithe ridge remained cloud free; exactly what we were hoping for on the following day.

After a grand evening in the bothy and a good nights sleep, we set off southeast through the forestry plantation initially on a good track, which petered out to a rough, boggy and tenuous path, but we found a way through before crossing the Abhainn an t-Sratha Bhain and gaing the loooooong west ridge of Dun da Ghoaithe.

this route up the hill isn’t easy of access, but it makes a fine alternative to traipsing up the dull access track from Achnacroish – the usual route of ascent. Oh, and the views are marvellous. Sgurr Dearg looms to the southeast:

While at the southern end of the Dun da Ghoaithe ridge the lower top of Mainnir nam Fiadh dominates the view:

Looking back to the summit of Dun da Ghoaithe from Mainnir nam Fiadh: We returned to the bothy by our outward route, the out and back taking six hours. After packing up we headed back down Glen Forsa and were fairly knackered by the time we reached the wee green Corsa. We pootled off to Loch na Keal and pitched the tent where we enjoyed venison burgers and a plastic mug of Chateau Poop du Naff before turning in for a well deserved kip ahead of our planned assault on Ben More the following day.

Continuing our run of great good fortune the next day dawned bright and reasonably clear with clouds scudding over the hill tops from the west. After breakfast we launched ourselves straight up onto the ridge of Beinn Fhada from the south bank of the Scarisdale River. It’s a steepy, but it makes a horseshoe out of the Ben More walk and avoids the boggy ground of Gleann na Beinne Fada. Once the ridge is gained the views are magnificent. Ahead lay Beinn Fhada:

Once we’d trotted along the ridge to the bealach between Beinn Fhada and A’  Chioch the onward route looks mighty impressive and ever so slightly daunting:

In truth there’s no difficulty involved, but it’s not a route I’d fancy in winter with significant snow and ice.

Once atop A’ Chioch the onward rote to the summit of Ben More involves a slightly airy ridge with a little easy scrambling; though this could be nervy stuff in poor visibility. 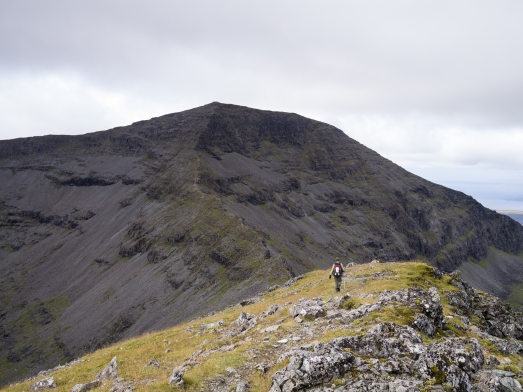 The view back down the ridge to A’ Chioch from the summit of Ben More: From the summit we scurried down the up-and-down route from Dhiseig passing a surprising number of folk of all ages on their way up. Most of them looked like they were looking forward to getting to the top – and I’m sure they wouldn’t be disappointed as the views are cracking.